Abstract art can be a funky, fascinating and colourful addition to any wall, as evidenced by Robert David’s unique barcode-inspired work

“Barcodes are all around us - on food packaging, newspapers, magazines, official forms and even staff ID badges,” says artist and interior designer Robert David. “Yet they largely go unnoticed due to their dimensions and format.”

Robert painted his first barcode, taken from a can of Red Bull, as part of a room design as an alternative headboard for a king-size bed. His unusual art form soon became popular and a commercial commission to paint several canvases for La Fosse restaurant in Cardiff followed.

Other recent commissions include a bottle of Bollinger champagne, a bar of chocolate and a bottle of expensive perfume.

“I take my inspiration from pop art," says Robert. "The linear styles of Piet Mondrian and Bridget Riley and the Austrian symbolism of Gustav Klimt.”

As well as private commissions, Robert has exhibited his art at the Gmex centre in Manchester and The Ickenox Art Fair in Islington, London.

Robert David has created an art form out of barcodes, and takes inspiration from pop art 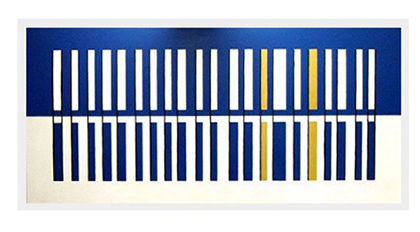 Talent search - If you have a piece of artwork you're proud o...

Making Hay (and Hereford) - A couple of photo exhibitions to inspire your...

Lockdown Through A Lens: Rob Woolf - More snow scenes as we wave goodbye to winter...

Lockdown Through A Lens: Gary Brine - Our photography exhibition continues with thi...