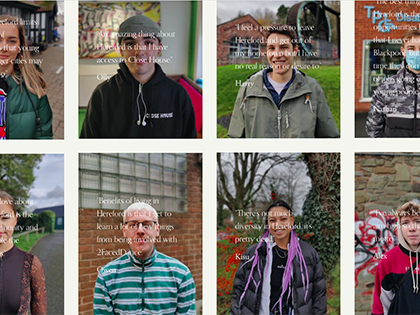 A couple of photo exhibitions to inspire your own creativity

As the country emerges from the cloak of Covid, photo exhibitions are beginning to crop up, revealing the creativity that’s been at play in the intervening period.

Saturday 31st July marks a day of drama in Herefordshire as the county’s new professional theatre company, Powerhouse, returns to live action with Humans of Hereford, a series of short dramas inspired by the lives of Herefordians.

Yep, we know. That’s not photography! But preceding the event in a pop-up venue in Hereford’s Maylord Orchard Shopping Centre will be a new photography exhibition, Point of View (P.O.V.)

A project run by Hereford production company Rural Media, P.O.V. empowers rural 14-25 year olds from Herefordshire, Shropshire and Worcestershire to speak their minds, share their experiences and influence change. The accompanying photo exhibition features portraits and quotes from a number of those involved and offers a fascinating insight into the minds of young people, revealing views and opinions rarely aired so frankly on a wider platform.

Street food from local company Bao To The Broth will be available throughout the day, while a bar from beer and cocktail specialists The Beefy Boys, together with a DJ, will move things seamlessly into the evening from 5pm, with the theatre performances beginning at 7.30pm.

Point of View is on display in the Maylord Orchard Shopping Centre, Hereford, from 11.30am. For more details, visit pointofviewrural.com/portraits. For more info about Humans of Hereford, visit www.powerhouse.company

Meanwhile, just a few miles west, Hay-on-Wye’s Thru The Lens photography gallery is preparing to unveil an exhibition of work by David Rich, who many readers may know from BBC’s Garden Rescue. Entitled Until Now, the showcase runs from 7th August and is made up of a collection of photos taken over a period of David’s life..

“My job, as a landscape designer has influenced my perception of place. Why it feels a certain way and how I can recreate or reimagine it,” says David. “Taking photos is very much an extension of this.

“Although I bought the camera and visited these places on my own two feet, I believe the emotion driving me to take photos is thanks to my grandfather Ray Rich. I’m often stopped and told what a lovely man he was and that he ‘took our wedding photos’. I’m proud to carry his middle name and love of photos.”

Just around the corner, David’s brother Harry, who’s also a part of the Garden Rescue team, will also be showcasing his creative talents, in his instance painting in oil and pastels. The Table gallery opened in Hay in 2016, sparking something of a trend in the town known more for its books than its art, as a further five galleries have opened there subsequently.

Harry Rich’s career in landscape design is more than evident in his art. “I’ve always been passionate about plants, the way they change and the dynamics between them,” he says. “They’re powerful, injecting colour and movement that adds life to a garden, and there are many similarities between the details of planting and paintings.

"The same principles I love when planting up a garden also play a role in capturing their character on the canvas. Oil paints and pastels allows me the freedom to provide texture and layers to my paintings, to capture the individual beauty of a plant or scheme.”

Both exhibitions run from 7th-28th August. For more information, visit www.ThruTheLens.photography and www.thetablehay.com

Cardigan climate creatives - Head to Cardigan this summer to view an inspi...

Apple of your eye - Head to Apple Store Gallery in Herefordshire ...

Stir my soul - Bring the natural world into your home with o...

Talent search - If you have a piece of artwork you're proud o...