POET OF THE MONTH 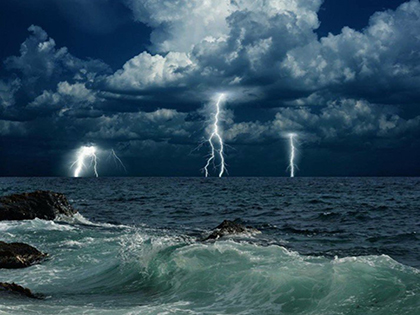 Who can deny the magnetism of a summer storm?

Heatwaves never last. But while some drift off into the banks of childhood memories, to be rekindled through rose-cloured glasses generations later, others go with a bang. And a flash or two.

Summer storms can be spectacular. Destructive also. But never dull. Even the haunting distant rumble of thunder is enough to instill a sense of foreboding that stirs our primeval fears so as to demand an outlet. And very often, that outlet is in prose.

This month's Poet of the Month first appeared on these pages back in December 2020. Then it was the magic of moonlight inspiring Janet Arnot to put pen to paper, with one of the first short stories in Creative Corner. Now it's the the crash of thunder, and lightening, and waves...

POET OF THE MONTH:
JANET ARNOT

An ogre's breath now snatches at the sheets.

This is not seen ashore among the streets.

Returning rainfall hurls itself back home,

And yachtsmen soon regret the urge to roam.

To kindling wood, the pride and joy is smashed

While on toward safe haven the sailor dashed

A wailing banshee racing at his back

And all around the foaming sea churns black.

Will his small craft be driftwood on the rocks?

Fear rises in the throats of those at sea,

Whenever this wild, raging serpent's free.

Have you got a poem you'd like to share with readers on our Creative Corner pages? Send it to newsletter@borderpublishing.com and include a bit of background about yourself, what inspires you, etc.

Dawn Cawton - Some things in life are free...

ROSWYNNE ANN JONES - One reader’s fortune looked to have bee...

Faith Ford - A serene September has given us much to enjoy...

Polly Spencer - Blue most certainly IS the colour this summer...