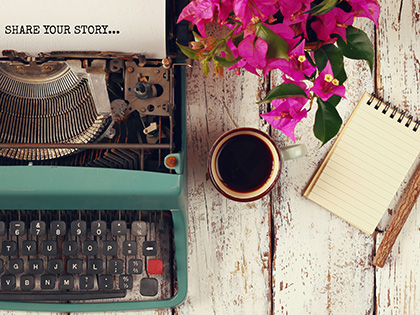 Born to Welsh parents, Garry Cann, grew up in rural Wiltshire but moved to Herefordshire in 2014, near to renowned town of books, Hay-on-Wye. In a varied career, he's spent many years battling with computers as an IT specialist, been a professional musician and also a school bus escort for special-needs children. Yet in all this time writing has been his passion.

"I like nothing more than to be left alone with a pencil, a notebook and a cup of coffee," says Gary who has written four books, available via Amazon.

"Smallbrook, my first novel, is set in rural England during the First World War, and has received good reviews from readers."

His second - a more contemporary thriller called Greenhill, was just as well received, and is based on the Welsh Borders.

"There are many more ideas and projects that I'm working on," he adds. And they've included Morning Nap, an enjoyable short story many a reader will recognise.

For more about Gary and his novels, visit his author page on Amazon here

The mid-morning spring sun was shining softly in through the large window as Maggie quietly opened the door into the well-ordered lounge.

“Are you sleeping again?” she said to the gently snoring occupant of the old armchair. There was no response and she frowned. She had a lot to do this morning. It was cleaning day. The frown was soon replaced by a lingering look and a loving smile. She just couldn’t stay mad at him. She left him in peace. It was probably best for both of them if he kept out of her way while she was busy, instead of being constantly under her feet.

Still a sprightly silver haired seventy-two years old, Maggie - her given name of Margaret always sounded so formal to her and made her think of her mother - liked to look after their bungalow, and couldn't rest easy if she thought there were things to be done. Not like the lazy lump in the living room who wouldn't notice if the place hadn't been cleaned for a week as long as he had regular meals put in front of him. But she loved him all the same and knew that her love was returned. Looking after the home they had together came as naturally to her as breathing. It was what her mother had drummed into her as a girl, and that was just the way it was.

Home these days was a very different place from the old and large semi-detached they’d lived in. Now it was a modern one-bedroom bungalow on what was called a 'warden-controlled site', not that they saw the warden from one week to the next. It was near shops and a post office, a god-send as neither of them liked walking far. They'd moved there four years previously when Maggie, for all of her sprightliness, started having trouble with the stairs. Keeping the old place spick and span had been proving a problem as well, but Maggie was too fiercely independent and proud to have anyone in to do her housework for her. The bungalow was a dream to keep clean in contrast to their old place which had seemed to gather dust from out of nowhere.

In her flowered housecoat, Maggie conscientiously did her housework every other day except Sunday and Monday, never failing to sit down satisfied when she’d finished. As for Sunday, as far as she was concerned, that was still a day of rest and going to church, while Monday was for her washing and ironing, just as she had always done, and just as her mother and her grandmother had done before her. As for him, well, it didn't matter what day it was as he would usually be asleep in his chair with the TV on for company. He slept a lot more these days.

She decided to leave the lounge for now and clean the bathroom instead; it wasn't that big and never took her long to finish. After running her fingers along the gleaming tiles and a final look to make sure she’d not missed anything, she closed the door with a sigh. There was something deeply satisfying about a shiny clean bathroom. Bedroom, hall and kitchen all quickly followed and despite the noise she must have made, she wasn't surprised that when she'd finished them, he was still asleep. Even vacuuming the living room floor hadn't disturbed him apart from a few extra disgruntled snores.

“You daft old sleepy head,” Maggie murmured to herself, her eyes filled with love for him as she left him to it. He looked so comfortable and peaceful and as long as he was happy, she didn't mind.

The two of them had grown noticeably older together over the last few years, relaxed in each other's company and neither complaining or making too much of a fuss about aching joints and fading eyesight. It was enough to have each other's company. She stepped into the kitchen and made herself what she considered a well-earned cup of tea.

There was more than enough room for them in the small bungalow. And the small garden, where he liked to spend a lot of his time - when he wasn't sleeping - was easily big enough for both of them.  Thankfully it was looked after and kept tidy by her young nephew, who, she suddenly remembered, was due to come round that very afternoon.

“Oh dear, we need some biscuits and cake before Martin comes,” she said, more to herself than to him in the other room. “He'll be wanting something with his cup of tea when he's done in the garden.” Maggie had always done her own baking, quite proud of her own abilities, and at one time a shop-bought cake would never have been given the time of day in her house. But the years go by, and bending for the oven had become impractical. Draining her cup, she washed and dried it and put it away. Another habit, never to leave dirty crockery lying around the kitchen. If you've finished with it, wash it and put it away. Slipping off her overall she replaced it with a warm coat. Despite the sunshine, it might still be a bit chilly outside.

“I'm just going down to the shop,” she called out. “Do you want to come?” There was no sound of any movement, so she opened the door to the living room to find him still snoring gently. She decided again to let him sleep on. “I won't be long,” she added quietly. As she closed and locked the back door behind her, he opened one eye slightly at the sound, but quickly went back to sleep.

“Hello Maggie‚ out on your own for a change this morning?“ Her friend Jean Macintosh was on her way back to her own bungalow, next door to Maggie's, having already been for her own shopping.

“Yes, Jean. I've left him at home asleep in his chair, the lazy old lump,” Maggie replied. Both women laughed, well aware of his habits. After a quick chat about this and that, they parted, but it turned out that Jean wasn't the only person to notice that she was on her own that morning. It wasn't far to the shops, but by the time she'd got there, two other acquaintances mentioned it to her and a man she'd only previously known by sight spoke to her for the first time and asked her if everything was alright because he'd not seen her on her own before.

It certainly was strange going out without him. As people had noticed, they nearly always went together. While Maggie went into the shop to buy what they needed‚ he much preferred to wait outside under the canopy, whatever the weather, happy to see if anyone he knew went past. That was the friendly sociable side of him. Once outside their home, he was fine but it was the getting him out that was the problem.

Having made her purchases, some digestives for him because she'd noticed there weren't many left, and ginger cake and chocolate bourbons which were Martin's favourites, she still automatically looked for him when she came out of the shop and hoped he'd be awake by the time she got home. He'd enjoy seeing Martin this afternoon. Going into the bungalow with the shopping, she took off her coat and looked quietly into the front room. He turned his head slightly, eyes half open, as if to acknowledge her return‚ but without actually waking up properly. She shrugged her shoulders and prepared their lunch. It didn't take her very long, as neither of them had large appetites these days.

“Your lunch is ready,” Maggie called out loudly, then opened the living room door and called again to make sure he'd heard and was awake, leaving it open so she could see him. “Come on, Martin's coming over this afternoon, so we haven't much time.” She put her plate on the table, then set his down in his place. Calling him yet again, as she still hadn't heard him move, she started on her own sandwich.

After a while he came to the kitchen door and pushed it open. She smiled brightly as the old Labrador came yawning into the kitchen to join her, his tail wagging as furiously as age would let it. She knew she wasn't imagining the look of love and trust in his eyes as he nuzzled her hand before diving into his bowl and devouring his lunch.

Valletta and the Year of Changes - Writing for children is no easy get out. Some...

The Gremlin - Just when you thought it was safe to go out a...

Reaching for the Light - A supernatural tale that's a love story to Mi...