Valletta and the Year of Changes 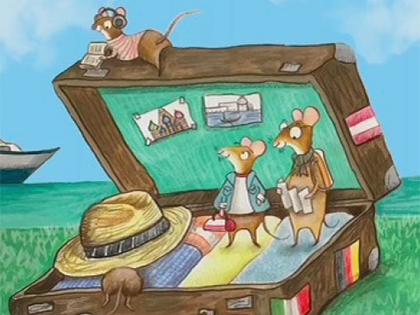 Writing for children is no easy get out. Some are born to do it, others fail to make the leap. Then there are those who didn’t even know they had it in them…

“I hadn’t thought of myself as a writer for children,” says Simone Mansell Broome. “But never pigeon-hole yourself.”

As anyone who’s tried will tell you, writing for a young audience is tricky. The simplicity of language attracts many wannabes, but in truth it can be far more difficult than writing for adults. It’s refreshing, therefore, to find a writer who never thought it her bag, but who’s now on the cusp of becoming a bona fide children’s author.

“Valletta and the Year of Changes was almost written by accident, by stealth,” Simone explains. “I thought of it as a short story but Valletta and her clan have scampered away with me!”

The Valletta in question is a mouse. With Maltese ancestry, naturally. That’s her in the denim jacket in the image above. Her clan, meanwhile, are the Stowaways – a family of mice sensing strange behaviour in the house in which they reside. But then, this is the year 2020. When humans started acting very strangely indeed.

“After years of writing poetry, lockdown provided me with – amongst lots of undeniable negatives – more time to write,” says Simone.

She’s not alone there, of course. But as well as an ebook of poetry and a lockdown blog, she hit upon something else last year. And Valletta was born, and eventually visualised also, via the artistic talents of Carmarthenshire illustrator Cerys Sussanah Rees.

“The book deals with resilience and resourcefulness, family, community and hope in troubling times. I think it works primarily as a book to read to children, but also as an independent read. I’m hoping readers might be interested in buying it for their children, nieces, nephews, grandchildren, or even for themselves.”

At first glance, that wide reach seems justified. The opening chapter certainly raised a smile here. But with kids – which we are not – well, you never know. You can judge for yourself, from the excerpt below.

Born in Tenby, Simone moved to England when she was six, but not for good. “After a long time in a number of different places ‘over the bridge’ I came back to Wales in early 2007,” she reveals. “I now live in North Carmarthenshire on an organic smallholding with quite a large number of family members. Our main crops are tourists and weddings.

“I’ve always written. My first slim volume of poems was published in 2008. Two other poetry books followed – including Cardiff Bay Lunch, in 2010. More recently, I’ve written commissioned poems for ITV Racing, for a local theatre group and have been included in several anthologies.

“My inspirations are my curiosity, my nosiness. I’m a collector of overheard snippets of conversation.”

Including from mice, perhaps?

Valletta and the Year of Changes is comes out in paperback on 21st June 2021, but copies will also be available at readings at selected outlets throughout Wales and the Borders. See below for details.

In the meantime, will there be any more from Valletta and the clan…?

VALLETTA AND THE YEAR OF CHANGES
by Simone Mansell Broome

…This meeting was at ten o’clock one Fursday morning.

Oslo said, ‘If Great Uncle Leningrad wants to see us all together, in the same place, it must be a MICIS.’ That’s a crisis in mousespeak, or something very important anyway.

‘Whatever!’ said Valletta, who sometimes found her brother a bit boring.

Everyone did come. Great Uncle Leningrad seemed to be in charge, as he generally was. He was wearing his glasses and looking serious. Great Auntie Sofia sat in a corner humming gently. She’d brought her knitting with her, in case her husband went on too long, which he sometimes did. As well as being good at painting and drawing, Aunt Florence also had extremely neat handwriting. Great Uncle Leningrad had told her to bring a pad and pencil with her to the meeting. She did as she was asked to, then sat next to him.

‘Florence will take notes so we will all know what’s what,’ said Leningrad. Florence blushed under her fur.

‘Shall we begin, my fellow mice? The humans are doing strange things. They have stopped going out to work and to school. Their car stays in the garage all the time. They are here all day and every day.’

‘No, they’re not,’ said Valletta. ‘They still go shopping.’ Valletta liked food rather a lot. Vienna, her mother, once told Great Auntie Sofia that Valletta ‘ate like a horse’ and that it was a good thing she used up so much energy. Valletta thought these were silly things to say.

‘The cupboard under the stairs is full of toilet rolls and cans of groceries like baked beans and tomatoes,’ went on Great Uncle Leningrad. ‘They are panic-buying, which means they are buying much more than usual.’

‘But why does that matter dear?’ asked Great Auntie Sofia, dropping several stitches.

‘Panic-buying, my dearest one, is what humans do when they think something bad is happening or going to happen. It’s what they do before a war starts. Or a bank holiday.’ Everyone thought about this for a minute or two.

‘And the cupboards are full of crinkly packets of pasta too’, said Nancy, who was one of Valletta and Oslo’s cousins. ‘Some of them are shaped like bows.’

The adult mice all smiled at Nancy, who also had a healthy appetite and who was fond of bows, frills and sparkly clothes. Unlike Valletta. When she thought no-one was looking, Valletta poked her tiny mouse tongue out at her cousin.

‘I can’t hear myself think,’ said Vienna, and all the other adult mice smiled again.

‘This,’ said Great Uncle Leningrad, ‘is something called “lockdown” and we mice must be careful. We must adapt, work together and be very clever.’

Everyone looked at him. There was no more poking out of tongues, knitting, humming or chatting in corners.

‘We must forage at night, not in the daytime,’ he went on, ‘unless we are sure, quite sure, that the humans have all gone out shopping or for their daily walk. And we must be quiet and rest or sleep when they are around, otherwise…’

‘We’ll go hungry,’ said Nancy and Valletta together. It was unusual for the two of them to speak at the same time, or even to agree about something. 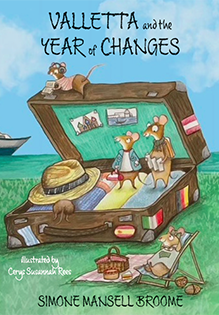 Valletta and the Year of Changes is published by Pretty Pug Publishing. To order (or for pre-orders prior to 21st June 2021) click here.

Simone Mansell Broome is holding two launch readings on 22nd June and 3rd July 2021 at her farm near Drefach-Felindre in Carmarthenshire. The events are invitation-only as numbers will need to be known in advance. But you can request an invite from Valletta herself, by emailing simone@simonemansellbroome.com.

Simone will also be reading at the Narberth Museum, Pembrokeshire on 7th July 2021, with other readings planned as restrictions lift.

The Merry-Go-Round - Beware the online dating game - it can leave ...