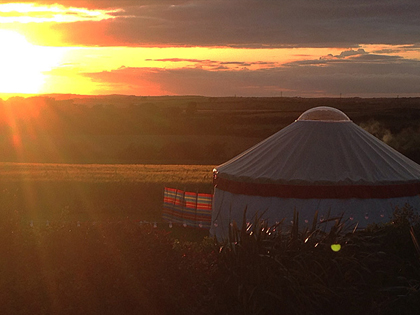 If you own a patch of land, setting up a pop-up campsite over the summer months could be a nice little earner, thanks to a relaxation of planning laws

With holidays abroad off the agenda for many of us this summer, camping has become increasingly popular, meaning pop-up campsites could be a healthy revenue stream for landowners.

Previously an abundance of red tape and planning laws needed to be negotiated before anyone could set up their own campsite, but now the Welsh Government has joined England in temporarily relaxing planning laws in a bid to boost the ailing hospitality industry.

For 56 days of the year, temporary sites can now be run as a going concern, with most landowners opting for the months of July and August to maximise the peak holiday season.

“Wales is always an extremely popular camping destination,” says Dan Yates of Pitchup.com, a national hub for campsites. “Pembrokeshire was last year’s ninth most popular spot across the whole of the UK. And in fact a Welsh site is our second-highest earner so far this year.

“The government’s announcement is fantastic news for consumers and businesses alike. It'll provide additional capacity to welcome holidaymakers as well as a valuable income stream for all kinds of landowners from farmers to pubs, sports clubs and stately homeowners and the surrounding local economies.”

Pop-up sites are often a back-to-basics offering, giving holidaymakers a taste of simple country life, requiring limited setup and maintenance by site owners. They proved to be a popular choice for British holidaymakers in 2020 with over 100,000 guests holidaying on a pop-up in the summer.

Many of the pop-up sites registered don’t have any facilities at all, but still charge about £15 to £20 a night, so it's certainly worth considering if you own a spare paddock or have very a large garden.

A taste of freedom - Restaurants are no longer lying empty, thanks...

Freedom at last - With restrictions lifting on both sides of th...

Beat the thieves - Oil theft may be on the rise, but you can pro...

Here we go again - It’s the new year and a new full nation...