A born and bred Shropshire lad, who went from pot washer to head chef at The Cliffe at Dinham in Ludlow

“I’m a local lad,” smiles Ian Pugh, head chef at The Cliffe at Dinham in the Shropshire town of Ludlow. “I was born in Shrewsbury and have lived in and around Ludlow all my life.” Ian now lives in the village of Elton near Ludlow, with his cat.

“I’m single, that’s a chef’s life,” he laughs. “I have the cat for company though, so I have an excuse for talking to myself!” Being a chef certainly takes up a lot of his time, and he’s well used to hard work having been raised on a farm. “I don’t come from a hugely foodie family but we always made time to sit around the table for meals, which sadly seems to have died away with this generation,” says Ian (pictured above middle). “My earliest memories of food would probably be scoffng my nan’s homemade fudge, and since then I’ve always had a sweet tooth!”

Going from an agricultural life to a career in the kitchen took Ian by surprise however. “I became a chef by accident, as I fell out of love with food during secondary school and got scared of trying anything new,” he explains. “I used to tell myself I didn’t like things without even trying them. I then got myself a wash-up job at Mr Underhills in Ludlow in 2000. At the time I didn’t know what a Michelin star or good food really was. But I slowly started trying food and found that what I’d feared was actually damn good. Now I’ll give anything a go.” 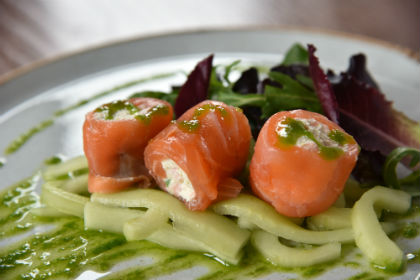 His chef’s training began at Mr Underhills. “I was trained by one of the top chefs in the country at the time,” says Ian. “What a privilege.”

He steadily climbed the ladder to become the head chef he is today. “For the last eight years Mr Underhills was open, I ran the kitchen, maintaining the standards and consistency required for a one-star establishment.”

When the restaurant closed, Ian looked around for his next challenge and, keen to stay in the area, set his sights on The Cliffe at Dinham. “I’d heard The Cliffe were looking for a new head chef, and funnily enough I had worked here before I went to Underhills, helping bottle up and clean the beer pipes,” Ian tells us. “It felt right.” Ian was given the scope to upgrade the standard of food being offered. “I feel I’ve made a good start, having gained two rosettes within six months of starting,” he says. “My menu changes seasonally and has a focus on good produce. I’d like to think I o er a bit for everyone, whether they’re after quick and easy or a full three courses. We also offer a taster evening once a month, as well as a fish night when we partner with the Ludlow Fish House once a month.”

Ian has his own favourites among the offerings. “At the moment my favourite would have to be my warm ham hock with piccalilli purée, pickled vegetables and rosemary-scented toasted sourdough – a twist on your standard ham hock terrine. I’m also a fan of my duck breast dish with pickled plum, turnips and a burnt butter and thyme jus. It looks wow on the plate and has beautiful flavours.” 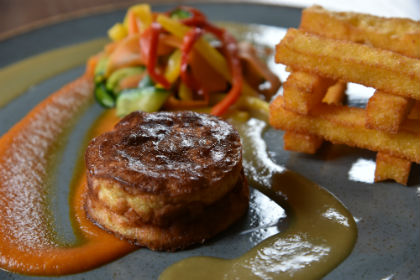 Ian loves the changeable nature of the job, and the sense of satisfaction that comes with great feedback from customers, or seeing the chefs he trains flourish themselves.

On the rare occasion that he has time to himself, Ian likes to swap the kitchen for the pitch. “I love to play football with my mates, and I generally try to stay fit and active, playing golf, cycling, running and training for a duathlon called Storm The Castle, which takes place in and around Ludlow annually. I’m constantly thinking of new and exciting dishes to put on the menu, too. I’m not really sure how I have the time to be honest, but us chefs always find a way!”

Huge food and drink discounts in Chester - With great deals of up to 50% off delicious m...

Meet the Chef: Hywel Griffith - Oxwich Bay feeds the soul of the head chef of...

Meet the chef: Matthew Smith - International cuisines and his own food hero ...

Meet the Chef: Adam Gaunt-Evans - After a career in Michelin kitchens and luxur...

A month of foodie delights - A Gower restaurant is celebrating a prestigio...