Chefs across the land will be itching to get back to work when the coronavirus restrictions are lifted. None more so than Hywel Griffith, the head chef at Beach House, Oxwich on the Gower Peninsula.

“To this day I honestly don’t know what it was that made me decide to become a chef,” he tells Welsh Coastal Life. “I think I was 13 years old, and still in school. I hated school and the idea of becoming a chef just occurred to me.

“It wasn’t actually trendy back then the way it is now. The only programmes that were shown on television were things like Can’t Cook, Won’t Cook; Ready, Steady, Cook; and Delia Smith. No-one in my family is, or has ever been a chef, so I don’t really know where that idea came from!”

Some might call it fate, but customers at Beach House Oxwich would undoubtedly call it darn good and delicious luck!

Originally from the North Wales town of Bethesda in Gwynedd, Hywel and his team opened the restaurant four years ago. Now it boasts a Michelin star three AA rosettes and was named AA Restaurant of the Year for Wales 2018/19.

It’s positioned right on the sands of Oxwich Bay, and benefits from mesmerising coastal views. The dining experience meanwhile, is relaxed and welcoming. According to the head chef himself, the environment of the restaurant is natural and minimalistic, yet refined and comfortable. 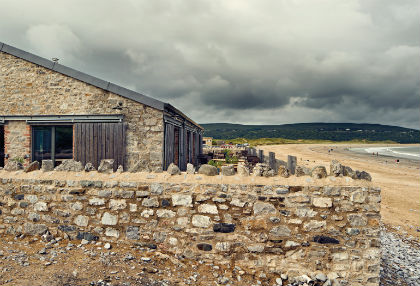 Hywel describes his cooking style as flavoursome, local and seasonal, and it’s a style that works perfectly for a kitchen situated right beside the ocean. “Oxwich Bay is such a soul cleansing area to work in,” he enthuses. “Being right on the beach, we’re surrounded by nature.”

The chef and his team are able to take full advantage of the plethora of top notch ingredients available in the vicinity, too, flooding the menu with local flavour. “We have so much on our doorstep,” he says.

“Our lobster is caught from the waters just in front of the restaurant, and we forage for most of our herbs and vegetables.”

Having a menu that’s updated with the time of year means that favourite dishes come and go for the team in the kitchen. “As the seasons change you get excited by the new produce coming in. I don’t like sticking to the same old dishes just because I liked them once. I love the variety that comes with the changing seasons and evolving my dishes.”

The restaurant offers various menus: there’s H’s Menu, which features dishes such as hake and lemon sole; then there’s the Tasting Menu which serves up five or eight courses; the Lunch Menu boasts pollock with mussel curry, potato, apple and coriander; while the Vegetarian Menu has wild mushroom with pearl barley, Granny Smith apple and winter truffle.

When guests eat at Beach House Oxwich, it’s as much an experience for Hywel as it is for the diners themselves.

“I like to cook in an open kitchen,” he explains. “It means I can see the reaction to the food and it gives me interaction with the guests.”

Bouncing back - A trip to Lake Vyrnwy for a stroll and a capp...

Catch of the day - Welsh lobsters are on the menu at top chef Ri...