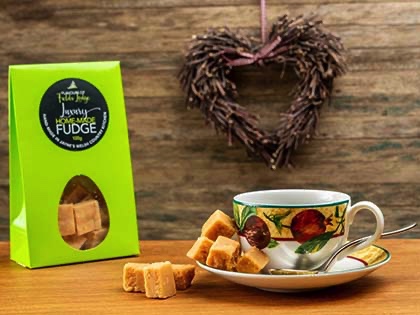 Fields Lodge boutique bed and breakfast has just been awarded a Great Taste Award by the Guild of Fine Food for its home made fudge.

And when you taste it, you’re not surprised. Jayne, the owner of Fields Lodge, makes her fudge on her 70-year old Aga at the B&B in very small batches.

Every batch is stirred by hand and with love, then hand cut and bagged ready for you to enjoy.

It’s an old family recipe handed down from Jayne’s nan, Violet, who used to make the fudge to treat her seven children and her husband Percy, who was an engineer on the fishing trawlers. Percy also used to take a batch with him to sustain his fellow trawler men on their spells away at sea.

Jayne started making fudge to give her B&B guests a treat and had so many compliments and requests to purchase as gifts, she was eventually persuaded to make commercially.

Since then, word of Jayne’s fudge has spread and she was invited to demonstrate how to make ‘British’ fudge to Americans at a conference in the USA for accommodation providers, who’s idea of fudge is very different to our own traditional recipes.

The secret ingredient in Jayne’s fudge, she says, is the milk, as it’s direct from the happy, grass fed cows that Jayne collects every few days directly from the nearby Steynton farm.

The milk is pasterurised on site and is non-homogenised, which is thought by some to be more beneficial for our bodies and health.

“I’m so delighted that the love that we put into making our fudge was recognised by the judging panel, and it’s fantastic to have something to bring the spotlight to Pembrokeshire to highlight the great producers in the county,” says a delighted Jayne.

Fields Lodge is no stranger to winning awards, being previously named as ‘Best B&B in Wales’ and ‘Wales’ Hidden Gem’ as well as being the long time holders of Pembrokeshire’s Finest Breakfast.

Homely Harry’s - Treat yourself to a comforting Sunday roast f...

Gastro glory - Wales and the Borderlands prove their culinar...

The cafe of kindness - Whoever you are, wherever you're from, a warm...