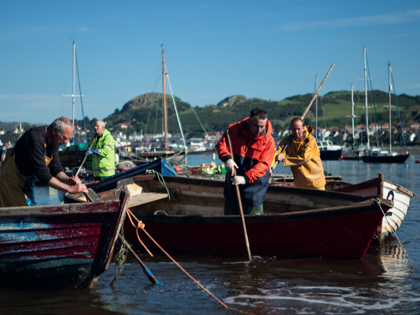 With the mussel season in full swing, Jules Hudson, the face of TV’s Escape to the Country, headed to Conwy to try his luck at the ancient craft of fishing for mussels

To those who know me, it’s no great secret that I'm not a huge fan of eating fish. Yet for some reason I do love a good bowl of fresh mussels. Conwy, in North Wales, has for centuries been famed for the quality of the mussels its estuary produces and, today, a handful of hardy fishermen are still at it, harvesting their catch in a manner that hasn’t changed much for hundreds of years.

Earlier this year (2016), while filming for Escape to the Country, I had the chance to go fishing for this ancient and now much sought after crop with Tom Jones, a young mussel fisherman whose family have been scouring these waters for mussels for at least three generations.

Tom and I met on a cold day in early March. Snow was in the air and still dusting the hills that surround the beautiful estuary and backdrop of Conwy Castle and its historic town. During the Middle Ages mussels were caught here mainly for their pearls. Long seen as the poor man’s shellfish, by the 19th century a weekly haul of some four kilos of pearls was enough to sustain a lucrative trade between Conwy and the jewellery markets of London. But eventually, pearl mussel stocks were exhausted and the mussel itself fell out of favour as a food source.

Tom’s father was one of several local fishermen who played a key role in reviving the fortunes of the Conwy mussel. It is without doubt a huge beast when compared to many more commercially rope-grown and farmed examples. The secret to the success of the Conwy mussel in many local restaurants is down to its habitat. The naturally formed mussel beds that exist at the mouth of the estuary lay in a unique environment, at the boundary between the salt water of the sea and the fresh water of the Conwy River as it flows out from Snowdonia. These are truly wild mussels, which thrive on a rich mixture of nutrients in the water that combine to produce big, meaty shellfish with a rich, succulent colour.

As I was about to find out, as Tom and I loaded up his small boat and headed off towards the mouth of the estuary, the method of fishing Conwy mussels has also played a crucial role in maintaining the mussel beds. Laying in the bottom of the boat is 20-foot-long rake, its head bristling with a dozen large tines, backed with a small D-shaped net. Hand raking, as it’s known, was once common practice among mussel fisherman all over the country, but today you’ll only see it here. Conwy’s fishermen still use it for the simple reason that it works. What’s more, they only fish when there’s an ‘R’ in the month, which allows stocks to replenish during the summer. 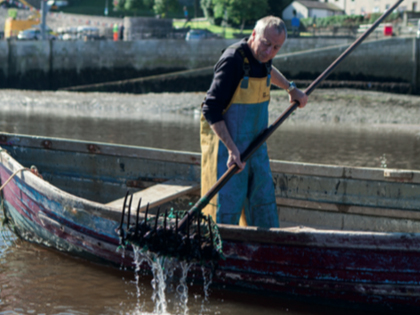 The raking means the beds aren’t damaged or shed out because smaller juveniles are left to fall back into the sea. The practice naturally limits how much any one boat can catch, while keeping to the traditional seasonal template ensures there will always be enough breeding stock left behind for the future.

As we motored out towards the fishing grounds, our boat was helped on its way by a strong ebb tide. The mussels grow at a great depth here, another reason as to why they become so large in just a few years. To reach them with a rake, you need to fish at very low or slack water to have any chance of reaching the beds below.

It all sounds simple enough, but knowing where to fish over the shifting beds of the estuary, often against the weather, is where the experience of Tom and his fellow fishermen comes in. These days less than a dozen individual boats fish these beds, a fraction of the former industry that Conwy used to support; nonetheless, it’s clear there’s still a great rivalry between them. Judging where to drop anchor and start the laborious process of raking up the catch is like reading tea leaves. The weather, rivals’ recent hauls and the state of the tide all play a role in this game of lucky dip.

I have to confess that my own stint at raking and fishing was greatly rewarding – and not just in terms of the amount we hauled up. There is something fulfilling and reassuring about harvesting a natural food from a sustainable resource, that makes the eventual eating of it all the more worthwhile. The weather was chilly but the experience undeniably romantic. After all, how many of us get to call the stunning Conwy Estuary our place of work?

Tom wouldn’t change it for the world. Having gone to school and sat in a classroom that still overlooks the river, his life has come full circle, but he’s quick to remind me that it’s not always plain sailing. “It’s great today but imagine it at three in the morning, when it’s pitch dark, lashing with rain and the wind is blowing up,” he pints out. “Time and tide wait for no man and nor does our fishing season. When the time is right you’ve got to go, regardless of the weather.”

Back on the quayside, we landed our haul and set about cooking a bowl of Tom’s earlier catch. Although you could go au naturel and eat mussels right out of the water, all commercially sold Conwy mussels have to go through a modern and rigorous 48-hour filtration cycle, a process in part devised over a century ago by Cheshire-born writer Lewis Carroll, right here in Conwy. 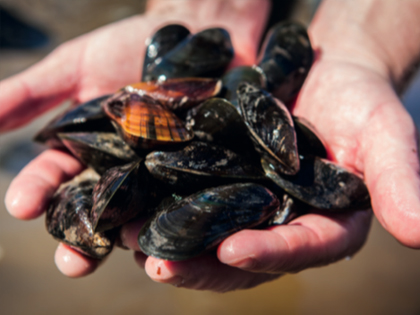 Above: the mussels found in the Conwy Estuary are among the largest to be caught and have an excellent taste

Our mussels had come in a few days before, but once doused in white wine, garlic, salt, celery and butter, it took just a few minutes to steam them to perfection. The results were delicious. They were unquestionably the biggest mussels I’d ever had the chance to taste and the most colourful, with a rich orange meat full of flavour. Irresistible!

Today, the story of the Conwy mussel is one of revival, of a return to time-honoured traditions and a way of life that hasn’t really changed for centuries for those passionate about it. Yet there’s perhaps an irony in the fact that for generations they were caught not for their taste but for their pearls.

The contents of the shells of these modest creatures may no longer adorn the necks of the well-to-do, but I don’t think it matters. Savouring their taste and supporting a local industry is an experience that you can’t put a price on. So next time you head to Conwy, make sure the month of your visit has an ‘R’ in it.

Conwy Mussels, The Quay, Conwy LL32 8BB. Tel: 01492 592689. www.conwymussels.com. You can sample Conwy mussels at the Gwledd Conwy Feast, held in and around the town centre and quayside in Conwy in October. For details, call 01492 338083 or visit www.conwyfeast.co.uk

Hats off to cooking up a storm - A Thai-American mum with a head for business ...

Food Hero – Perly Freeman - Natural ingredients are all you need for deli...