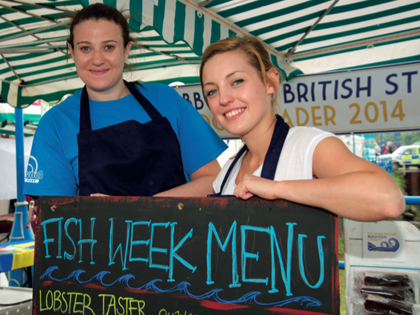 Pembrokeshire Fish Week has grown from a tiny, community-run event into one of Europe’s tastiest food festivals

With almost 400 events across the county, there’s far more to Pembrokeshire Fish Week than just the addition of an extra fish dish on the menu.

During the nine-day festival in late June and early July, restaurants, pubs, cafés and B&Bs offer special fish menus, there are pop-up events and seven-course taster menus from top chefs, plus fishy-themed fancy dress barbecues, fish-preparation workshops, cookery demos, family events and adventure sports, such as kayaking and coasteering. And if you want to try catching a fish, you can do that, too.

With a coastline that offers a fishing area of almost 115,000 hectares, fishing has been a vital part of Pembrokeshire life since the 16th century. Although it’s declined considerably since the early 1900s, when Milford Haven was the sixth largest fishing port in the UK, figures for 2010 showed that fishing contributed more than £8m to the county’s economy.

The festival started in 1999 as a national sewin (sea-trout) competition hosted on three rivers in West Wales. Now it’s a county-wide event involving more than 300 businesses. Its success has led to several Visit Wales awards and the kudos of being named the UK’s number one food festival by both Visit Britain and The Independent. 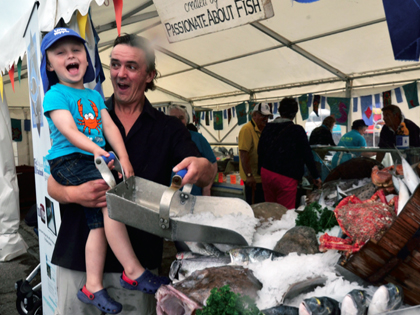 Above: Fish Week in Pembrokeshire is a family friendly affair

“The aim has always been to develop the festival into a major event for Wales, supporting Pembrokeshire’s local food, drink and fishing industry and the tourism economy as a whole,” she says. “As the festival has grown, it’s resulted in a diverse programme of activities and events, increasing its appeal to a wide spectrum of visitors and firmly establishing it in the national events calendar. As well as attracting visitors to the area it’s also become a well-supported, community event for Pembrokeshire residents, too, with some actually taking time off work during the week to enjoy it to the full.”

The 2015 event was postponed due to staff illness but it returned in 2016 with a new structure, operating as a social enterprise supported by Pembrokeshire County Council and the Port of Milford Haven.

“Overall it was felt that postponing it for 12 months did the festival the world of good as it made everyone aware of the impact it actually had on the county and how beneficial it really was,” says Joanne.

The opening weekend invariably kicks off with the Milford Fish Festival at Milford Fish Docks, which includes chef demos and a music stage, while other family events take place on the closing weekend at Goodwick Beach and Saundersfoot Harbour.  In between there are many highlights for foodies, including several appearances from celebrity chefs. 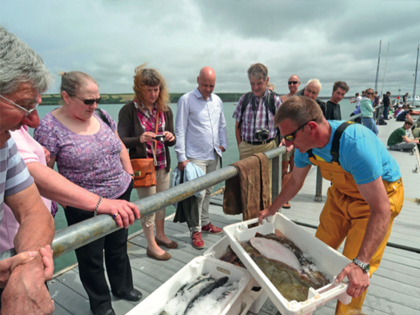 Above: Grab the chance to visit those really in the know - the fishermen themselves

In 2016 a family friendly ‘Lobsters v Mobsters’ fancy dress-themed barbecue took place at Café on the Quay in Lower Town, Fishguard. This seasonal café, at the end of the quay, serves brown crab and lobster sourced from the harbour almost daily. “For Fish Week we thought we’d add something a bit different when we aired our lobster costumes,” says owner Jo Hewitt. “Think the Cod Father or perhaps just your favourite under-the-sea character like the Little Mermaid with your partner dressed as Al Capone.

Live music is also enjoyed throughout the week, not to mention gourmet fish and wine tasting, and your chance to meet the real stars of the show – the local fishermen.