Preparation, passion and quality ingredients are the keys to success, according to Welsh cider maker Andrew Gronow

Having produced award-winning beverages for 15 years now, the co-founder of Llantwit Fardre-based Gwynt Y Ddraig - The Welsh Cider & Perry Company - Andrew Gronow can afford to take time out and look back.

“The idea came when an elderly relative was having trouble harvesting all the fruit in the cider orchard on his farm,” Andrew reminisces. “Making cider seemed like the obvious choice, so with my Uncle Bill – who’s now retired from the business – I offered to pick as many of the apples as we could and decided to have a bash.

“I studied the basis of cider making, then designed and built my own press and bought a few bits of second-hand equipment in order to press and produce the first batch,” Andrew adds. “I also enrolled on a cider-making course to learn about the basic principles involved.

“There are a multitude of varieties of cider apples in the UK and learning to pair them to make the perfect blend for cider is quite a skill.”

The rest, as they say, is history. The company has grown and now supplies shops and pubs throughout the UK, as well as sending exports to countries across Europe and further afield. “It’s a fantastic feeling that I’m creating a product that I love and that other people love,” Andrew beams. “It blows me away that people in other countries are also enjoying my ciders.” 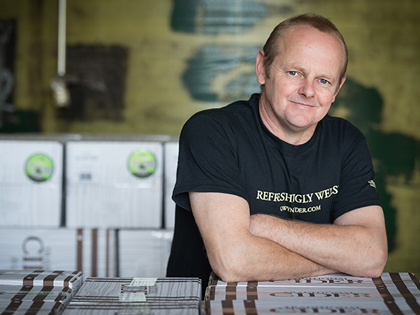 Andrew Gronow keeps his cider recipes close to his chest

“I think the success of the ciders we produce is due to meticulous preparation. I’m a lover of cider myself and I know what I like – and don’t like – to drink. I’d never produce anything I personally don’t like.

“We also insist on only using the best ingredients because, after all, there’s little point going through the processes if the end result is going to be poor, which it will be if you’ve used poor ingredients.

“We have a brilliant relationship with each of the apple growers we purchase our fruit from as we’ve known them for many years now. Because of that, I’m able to help out at the orchards if required throughout the year and be there when the first fruit is ready for picking.”

Even after 15 years at the helm, Andrew is as enthusiastic about his work as he was when he bottled his first brew. “What’s not to love about being a cider maker?” he grins. “I come to work every day and I’m surrounded by the intoxicating scent of apple in the air. Most of all I love the process of creating each of the ciders; each one is blended differently to create its unique taste.

“My recipes are a closely guarded secret, but creating them and getting it right every time we make a new batch brings a real sense of accomplishment.”

Hats off to cooking up a storm - A Thai-American mum with a head for business ...