Tell us about what you do.
We’re a distillery based at The Stonehouse Brewery site near Oswestry, Shropshire. We produce whisky, three gins, vodka, apple brandy and a bourbon equivalent. I’m co-founder and director, which means doing absolutely everything – planning, distillation, finance, bottling, packaging, marketing and selling!

Why a distillery?
The plan was hatched by four of us (pictured from left): me, Alex, Alison and Shane. Alison and Shane already had Stonehouse Brewery. Although they’d mused about producing whisky, I set the ball in motion, as owning a distillery had become something of a dream of mine. We share a mutual love of drinks. 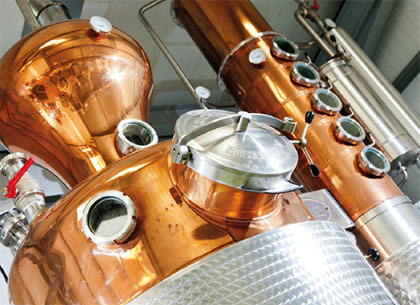 How did the business come about?
I’d been working in Abu Dhabi and when I returned to the UK, I began to work part-time at Stonehouse Brewery. I suggested distillery plans and ideas to Alison and Shane and the decision was made to set up a separate company. For Shane and Alison, setting up a distillery was a natural progression for the brewery.

Where did the name come from?
Alex and I live in an ex-public house called the Hen and Chickens, while Alison and Shane live in Stone House and we combined the two. The name really represents who we are.

Why is where you’re based ideal for a distillery?
Being co-located with the brewery has lots of advantages including a purpose-built building and facilities. We also all love where we live, which makes the whole work-life balance so much easier.

What do you love about your products?
We’re so proud of each one of our spirits. Our first product, the London Dry Gin, is award-winning. Our Rosé Gin has a lovely vanilla flavour and a hint of smoke and we like to say it kisses the inside of the barrels! Our bourbon equivalent, Old Dog Corn Liquor, first went on sale on 28th January and of the 300 bottles, we only had about 70 left at the end of February! Our Charcoal Filtered Vodka is perfect over ice with a chunk of dark chocolate. Nonpareil is an apple brandy distilled from our own cider, made using a native Shropshire apple that almost became extinct inthe 1970s. We’re also very excited as we now have the equivalent of about 10,000 bottles of whisky maturing. 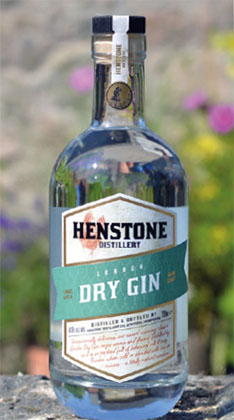 What’s unique about your distillery?
Our still is so big, producing a batch of gin takes about 36 hours! As a result we extract a huge amount of oil from the botanicals, including juniper and coriander, and when the gin gets cold or is poured over ice, it can ‘louche’ (go cloudy). It’s a natural reaction that makes us stand out from the crowd. We’re also one of only a handful of distilleries south of the Scottish border capable of making their own whisky wash (part of the distilling process), which allows us to experiment with yeasts and fermentation times, resulting in a very palatable spirit.

Describe your typical customer.
They range from those who want to enjoy a gin cocktail in our on-site bar, to those who buy a bottle for themselves or as a gift.

What are your plans for the future?
This year will have quite a focus on our whisky launch for next year. We have to make sure we can maintain sufficient volumes to cater for the demand we expect. We’re also looking at a slightly different gin. Watch this space.