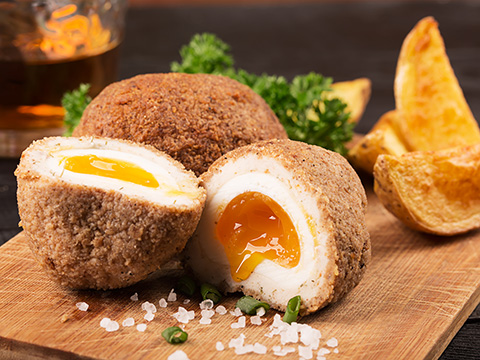 Is it, or isn't it? The proof is in the eating. So here's our recipe for controversy

It’s a crazy world we now live in when pub staple, the humble Scotch egg, can dominate the headlines during a global pandemic.

Is it a substantial meal? Opinions remain divided. "Oh yes it is!" says Michael Gove. "Oh no it isn't!" says Matt Hancock. Who says our Government's performance hasn't descended into pantomime?

Either way, while ministers continue to debate whether this sausage-meat snack is a main meal or a mere side order to 10 pints of lager, why not cut out the middle man and try our delicious, yet simple (but not insubstantial) recipe in the safety of your own kitchen, where the Covid marshalls can't get at you.

Before you start, you might want to have a drink on the go. And what better than a Drakeford - the new mocktail from Llangollen pub Three Eagles. Check it out here...

STEP 1: Bring a pan of salted water to a rapid boil, then lower four of the eggs into the pan and simmer for 7 mins 30 secs exactly. Scoop out and place in a bowl of iced water, cracking the shells a little (this makes them easier to peel later). Leave them to cool completely, then peel and set aside. (Can be boiled the day before.)

STEP 2: Put the sausagemeat, pepper, ham, stuffing and herbs in a small bowl, mix to combine, then divide into four equal balls. Squash one of the balls between a piece of clingfilm until it’s as flat as possible. One at a time, lightly flour each cooked egg, then use the clingfilm to help roll the sausagemeat around the egg to completely encase. Repeat with the remaining sausageballs and eggs.

STEP 3: Beat the remaining egg and put on a plate. Put the flour and breadcrumbs on two separate plates. Roll the encased eggs in the flour, then the beaten egg and finally the breadcrumbs. (Can be prepared up to a day in advance.)

STEP 4: To cook the eggs, heat 5cm of the oil in a wide saucepan or wok until it reaches 160C on a cooking thermometer or until a few breadcrumbs turn golden after 10 secs in the oil. Depending on the size of your pan, lower as many eggs as you can into the oil, and cook for 8-10 mins until golden and crispy.

Drain on kitchen paper, leave to cool a little, then serve halved with some piccalilli. To make it even more sustantial, add salad leaves with sweet potato wedges simply roasted in the oven with a little vegetable oil.

The perfect pud - We all need some comfort at the moment and he...

A taste of the Med - Simon Doyle from Harry’s Bistro on Angl...