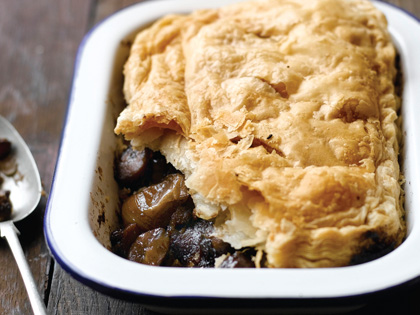 “Chestnuts roasting on an open fire...” Few foods epitomise chilly autumn nights in the run-up to Christmas as these shiny brown nuts. That said, this sweet but strong tasting nut has never been as popular here as in Continental or American kitchens, which is a shame as it’s a versatile, flavourful ingredient that can spruce up many an autumnal dish.

Keen foragers can find wild British sweet chestnuts (not to be confused with inedible horse chestnuts/ conkers) in great numbers in fields and on streets as they start to fall. However, those used more commonly in cooking are larger varieties which tend to come from Europe; you’ll find them in greengrocers, farm shops and even some supermarkets.

Generally, chestnuts are used as additives rather than a meal in their own right and they work well in sauces, stuffings and stews. Field mushrooms compliment their flavour well, as do apples and sweeter vegetables like sweet potato and parsnips. In fact, combined with the former, they make a good breakfast hash. Dishes containing meat are primarily pork orientated, but for a special seasonal twist you might like to try using them as an accompaniment to pan-fried wood pigeon.

1. Preheat oven to 200°C/Gas 6.
2. Melt the butter in a frying pan, add the olive oil to stop it burning and fry the onions until slightly browned – about 5 minutes.
3. Add the mushrooms, bay leaves and rosemary and cook for a further 4-5 minutes.
4. Add the chestnuts, red wine and vegetable stock. Bring to the boil and simmer for 20-30 mins until the onions are soft.
5. Add the beurre manie, stirring constantly until is dissolves, and cook for a further 5 minutes until the sauce is thickened.
6. Stir in the mustard and flat-leaf parsley and season to taste with salt and freshly ground black pepper. Spoon the mixture into a pie dish.
7. Roll out the pastry on a floured surface and place on top of the filling, crimping the edges to seal the pie. Cut a cross in the top of the pastry to let the steam out during cooking.
8. Bake for about 20 minutes until golden. Serve immediately.

Get your claws into crab - Tuck into Welsh crab, plucked fresh from&nbsp...

Life of pie - Celebrate British Pie Week from the 7th to th...

Cracking party food - Having friends or family round for a New Year...