Live the life of Tudor nobility in this astonishingly well-preserved and sensitively renovated 800-year-old property, reputedly once owned by Henry VIII

A walk round this absolute gem of a house is like exploring the set of a Tudor-period TV drama, such is the wealth of history and elegance on show.

But the origins of Llanthony Secunda Manor in the village of Caldicot, Monmouthshire, go back further still.

It was in the 13th century that it was first constructed as a farm building, and though extended in the 15th century, much of the living quarters – the sitting room being a good example – are situated in the oldest part of the building.

The current owners have done a great job of renovating the house – maintaining its immense character and keeping the original features on display, while adding plenty of modern luxuries.

An arched oak front door leading into the main entrance hall provides a taste of what’s to come.

Many of the interior spaces include original exposed beams, medieval stonework and feature fireplaces. The sitting room has cobblestone flooring and an open fire, while the kitchen has a 15th-century bread oven, an oak lattice window with wooden shutters, and a window bench seat. This room also demonstrates the modern luxuries the house enjoys, with its American-style fridge freezer and cast iron ESSE range cooker, both of which will remain in the property.Then there’s an integrated dishwasher, double Belfast sinks and black granite worktops.

Taking one of three staircases to the first floor, you’ll find a dining hall in which the grand dining suite will remain, plus there’s a large oak lattice window, and a cobblestone hearth around the room’s feature fireplace.

There’s also a library room on this floor, a bathroom with clawfoot roll-top bath, plus a bedroom with an en-suite shower room and walk-in wardrobe.

A spiral staircase leads to the second floor where there are three more bedrooms, plus another bathroom with roll-top bath. Finally, the top floor has a fifth bedroom (with bread oven!) and a loft room that could be converted into a further bedroom.

Outside, the garden is private, consisting of lawns, flower beds and mature trees, all surrounded by stone walls and hedges.

If you want to feel like Tudor royalty with a place that exudes history and charm from head to toe, then Llanthony Secunda Manor might be your dream come true.

Bedrooms – Five; two of which have en-suites

Location – Close to the centre of Caldicot – a village five miles from Chepstow, 22 from Bristol and 27 from Cardiff

Scroll down to see more images of this property... 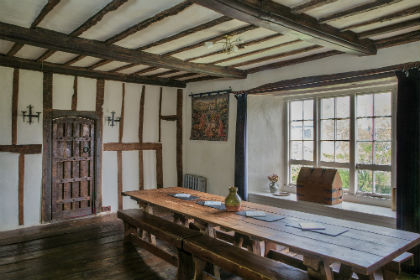 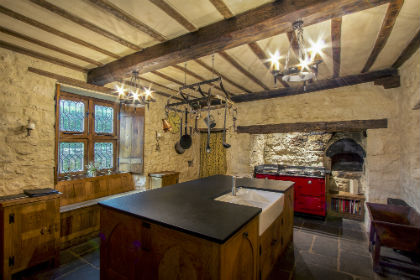 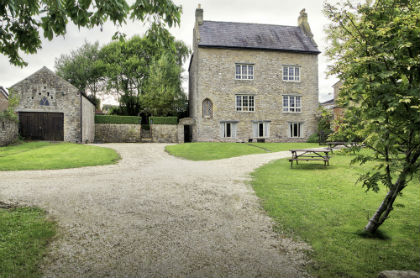 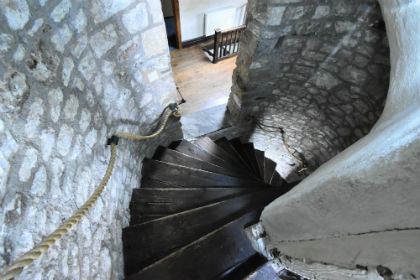 Ledbury lettings - With the boom in staycations, there’s n...

A Monty Mansion - Set within 14 acres of glorious Montgomeryshi...

Ancre Hill Estates, near Monmouth - A glamorous country house at the centre of a ...