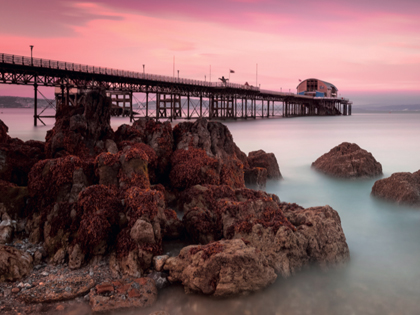 At one time, no seaside resort was complete without a pier stretching out over the waves. So let's celebrate these impressive feats of Victorian engineering

A pier stretching out into the sea is one of the most iconic sights at Britain’s coastal resorts. They're a reminder of the wealth and engineering feats of the Victorian age, and the growing desire for holidays by the seaside. We've picked three that epitomise this bygone era and worked in walks around them.

Mumbles Pier was opened in 1898 as a railway station and terminus of the Swansea to Mumbles railway line (the world’s first passenger-carrying railway). It’s still enjoyed by the many local people and visitors who stroll along it each year. Although the pier has been restored and renovated, it still retains many period features and much of the charm of a traditional Victorian pier. One of its most famous features is the ‘Big Apple’ kiosk, which was one of many built in the 1930s to promote cider. The Big Apple at Mumbles Pier is thought to be the last ‘apple’ in use today.

Royal Pier in Aberystwyth also dates back to Victorian times; it was opened in 1865 and was the first seaside pier in Wales. It was originally almost 250 metres long but a much shorter version stands today – the result of a series of storms during its lifetime. A glass pavilion was added at the turn of the 20th century, which now houses a restaurant, pub and nightclub.

And, finally, our walk in North Wales takes us to the Grade II-listed Garth Pier in Bangor. It’s the second longest pier in Wales at more than 450m long (behind Llandudno Pier, which stretches for a whopping 700m). It was opened in 1896 and boasted a landing platform for pleasure boats on the Menai Strait plus rows of kiosks along the top. It faced demolition in the 1970s but was saved, renovated and reopened in 1988. Today, this wonderful pier is open to pedestrians who can travel back in time to marvel at the Victorian architecture that was once the pride of seaside resorts across Wales. Just click on the following route numbers for print-ready PDFs...

Route 3 - Discover the famous Garth Pier, the second longest in Wales, on this pleasant amble around Bangor

Route inaccessible? If you find that any of the routes featured on walesandborders.com has become inaccessible in any way, do let us know so we can alert the necessary authorities on your behalf. You can email the Web Editor by clicking here

For the full feature on pier walks, see the April 2016 issue of Welsh Coastal Life. For back issues, click here

STAY LOCAL! - Exercise is one of the few defined reasons we...

Two-day Easter excursions - With numerous public holidays just around the...

Walks: Southern Ceredigion Coast - Famed for its marine wildlife and wonderful b...

Short climb & cake walks - In the final part of our winter-warmer trilog...