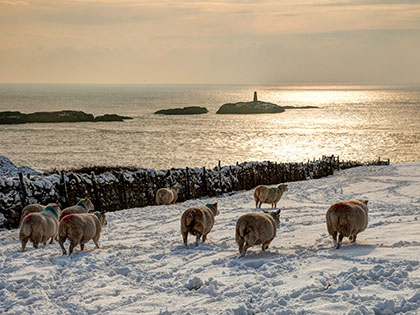 Explore coves, natural rock arches and clifftops on this stunning walk at Rhoscolyn

Tucked away on the south-west corner of Holy Island, Anglesey, lies the village of Rhoscolyn – a sparse smattering of whitewashed houses, plus a pretty little church and a pub.

But it’s the coastline here that really captures the imagination. In just a short walk you can experience high cliffs, tiny coves, sandy bays and – the area’s piece de resistance – natural rock arches.

The most striking of these is Bwa Gwyn (White Arch), which can be seen from this month’s walk. In calm summer conditions you might see kayakers paddling through the famous hole in the rock, but at this time of year you’re more likely to enjoy rough seas battering the cliffs.

Our route then takes you south and east, passing popular rock-climbing cliffs with terrifying names such as Dream & Screams and Warpath, to the historic St Gwenfaen’s Well – whose impressive remains are a scheduled monument. The way also features the stunning sandy beaches of Borthwen and Silver Bay before returning to the village.

There’s some attractive heathland en-route, plus the chance to spot the odd peregrine falcon, kestrel and Atlantic grey seal. 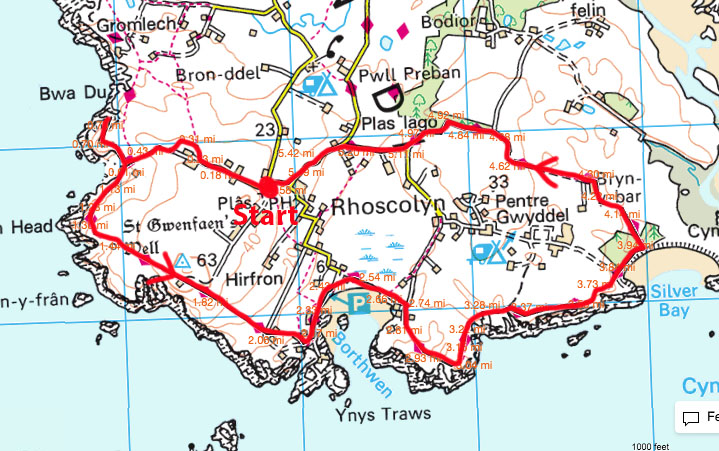 1. Take the road to the right of the church, which soon becomes a track. Just before the track enters the walled farm, head right through a kissing gate, round the farm buildings, and rejoin the track down to Porth Saint.

2. Take a short diversion right, along a rough path to the highest point, then heading across the headland. Upon reaching boulders the ground falls steeply away to the sea, and immediately ahead is Bwa Gwyn (White Arch).

3. Return to Porth Saint and follow the Wales Coast Path south west, soon passing between cliffs and an impressive dry stone wall. Stay close to the wall as it bends sharply left above Porth Gwalch to a kissing gate and to St Gwenfaen’s Well.

4. Beyond the well the path makes a beeline for the Coastguard Lookout post, from where there are unrivalled views of the mountains of Snowdonia and the Llyn Peninsula.

5. The path continues and descends steadily to a kissing gate near some buildings. Head through this, then immediately left and right along a waymarked track between walls. After a sharp left the path becomes a narrow permissive footpath, which keeps right through a private garden, then through a waymarked gap in a wall before a track descends to a small bay.

6. Take the driveway left from the bay, between houses, and drop down to the main beach at Borthwen. Cross the sands then ascend a concrete ramp, go left and take the blue painted wooden gate, ignoring the footpath sign to the left. Follow a path between walls, then turn right along a crossing lane. After the houses, turn left on a footpath onto heathland and another kissing gate.

7. Follow Wales Coast Path waymarkers heading roughly south-east to reach the coast, then follow the cliffs around the headland to Silver Bay. Leave the bay via wooden steps into and through a conifer wood, after which turn right then immediately left through a gate into a field, heading for the right hand side of the building.

8. A kissing gate with a stone stile beyond leads to a farm track. Follow this track, which later becomes a lane, to join a road at a sharp corner. Go right here, then left at the next road junction back to the car.

This walk is courtesy of Walking Britain www.walkingbritain.co.uk

Wildflower Wanders - Head out on a coastal walk to spot springtime...

Beach-to-beach strolls - Why stick to one beach when you can take in s...

Be here now - Be in the moment and improve your mental well...

Wild with delight - A kaleidoscope of colours will greet those wh...

A walking resolution - Have you resolved to get fit this year? With ...