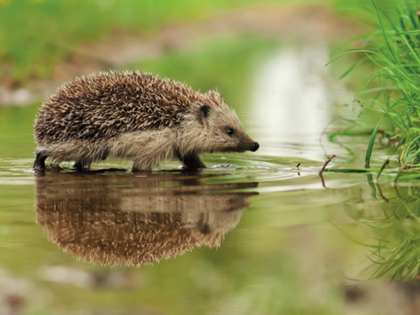 There's been an alarming decline in our hedgehog population over the past century. So how can we help our spiny friends?

In theory, hedgehogs ought to be thriving in modern Britain. They certainly have all the credentials to thrive. They have a generalised diet, few natural predators, a high reproductive rate, are relatively tame, can live in both rural areas and urban landscapes and they are popular with humans.

But the most recent survey of their numbers suggests the population may have almost halved during the early years of this half century – and this comes on top of very high declines during the past.

The spines that are a hedgehog’s obvious trademark are actually long, thick, guard hairs, beneath which there’s an undercoat of normal fur; the spines are hollow, with relatively good insulatory properties. Hedgehogs are usually solitary, only meeting to mate in the spring. This leads, naturally, to raised eyebrows. The answer is that males have a very long, forward-mounted penis, while the female’s vagina is unusually far back. She also flattens her spines during the act but, even so, it is a cautious affair.

Six weeks later, the female gives birth to up to ve young in a football-sized nest of leaves and grass (the boar plays no part in parenting). The babies, born in May, are covered with soft, white spines, though soon darker, harder spines emerge. At a week old, the babies can erect these and at 11 days they can curl up. They are weaned at four to six weeks and then begin to eat prodigious quantities of worms, snails, slugs, beetles, grubs, carrion and even fruit throughout late summer and early autumn, by which time they weigh up to 1kg. This is critical for survival because, as insectivores, cold weather is a major challenge. They respond by hibernating but even this requires huge fat reserves.

Thus, in early winter they find a snug pile of dry vegetation in which to sleep until March. Unfortunately, many perish in bonfires while some – if not most – youngsters perish when they run out of energy reserves before spring. During hibernation they sleep tightly curled up, their body temperature drops to that of their surroundings, their heartbeat slows from 190 to 20 beats per minute and their breathing falls to 10 breaths per minute.

However, even this strategy takes huge energy reserves and those that have failed to lay down suficient fat reserves may not wake up.

“If you see a hedgehog wandering around in daylight, it is probably in trouble,” says Fay Vass, chief executive of the British Hedgehog Preservation Society (BHPS), who sees this problem firsthand every day. “Apart from females about to give birth, or with very small young, they are nocturnal.”

She says anyone who finds a hedgehog that they're sure is unwell should pick it up with gloves or a towel and put it in a high-sided box in a quiet, warm place and provide a little catfood and water. “And if they need help they should phone us – we have a network of 800 volunteers around the country who can help.”

Make your own hedgehog box

You can buy special hedgehog boxes from wildlife organisations and local gardening companies, but it's fun and almost free to make your own from untreated recycled materials. You need:

The British Hedgehog Preservation Society is a registered charity based in Ludlow, south Shropshire. It was founded in 1982 by Major Adrian Coles MBE; when he found a hedgehog had got stuck in a cattle grid on his land and couldn’t get out, he built a ramp in the grid to ensure other hedgehogs didn’t get stuck and was responsible for seeing this same practice adopted by Shropshire County Council. In the wake of the huge public response, he founded BHPS. Today it has more than 11,000 members and helps to protect and preserve our native prickly pals through education. Key times for their campaigning are in autumn, around Bon re Night (5th November) and spring, when gardeners start becoming more active again. Their annual Hedgehog Awareness Week in May promotes practical ways to help hedgehogs - 2016 saw a particular drive to make gardeners aware of the threats posed by strimmers, for example.

Nocturnal, solitary creatures, hedgehogs, which are patchily distributed across the country, are hard animals to count accurately (no one is quite sure, for example, of the size of their territories). Sadly, one of the best survey methods is to count road casualties. Even though the animals appear to have learned not to curl up at the sound of an oncoming motor, cars still take a heavy toll – but at least this reveals their distribution (they are generally absent from uplands and conifer woods, for example). The most credible recent estimate (compiled in the mid-1990s) put the population around 1.5 million, although this followed a sharp decline over the previous century.

Dogs, foxes and badgers can all break through the spiny defences but the worse threats undoubtedly come from man. Cars are an obvious hazard, cattle grids less so, but habitat degradation is the biggest problem. As small omnivores that feed mainly on invertebrates, supplemented with occasional eggs, rodent nests and carrion, any decline in their numbers is worrying (after all, other generalists such as foxes, badgers and magpies are thriving). Thus the plummeting hedgehog population could represent major environmental problems. Many rural areas have lost their hedges and rough pasture, which are hedgehogs’ favourite hunting grounds. Also, agricultural chemicals have drastically reduced food supplies. As a result, the latest survey by the BHPS and People’s Trust for Endangered Species suggests rural populations have dropped by up to 50 percent since 2000.

“They’re clearly struggling with a range of problems,” says Fay, “but the loss or degradation of habitat is the biggest issue.”

This may explain why they seem to have fared slightly better in suburbia, where the mixture of trees, shrubs, hedges and lawns mimics their preferred woodland-edge habitat. Here, their presence delights gardeners, because not only are they pretty but they cheerfully guzzle snails and slugs throughout the night. But even here they are struggling and it is thought numbers are down at least 30 percent over the past 15 years. 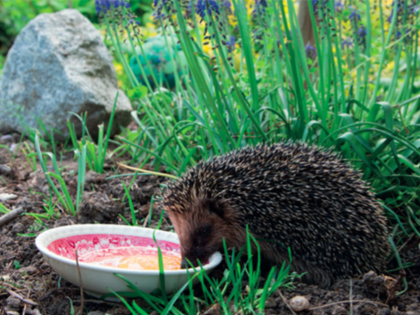 Above: Making water available in your garden helps hedgehogs to survive in hot weather; if you want to provide supplementary food, too, then try mealworms, raw eggs and cat food – they will also eat the slugs and snails they find in your garden

The story isn't universal gloom. They are relatively prolific. For example, in 1974 four animals were introduced to South Uist, in the Outer Hebrides, in a private garden pest-control experiment. Unfortunately they thrived on eggs from rare wader colonies and soon there were 5,000 hedgehogs (there is now a scheme to relocate these to the Mainland). Despite the impact on the birds, the incident demonstrates the hogs’ remarkable potential to recover given favourable conditions.

Creating these need not be expensive. If farmers and gardeners in the rest of Britain could leave a few more ‘untidy’ patches of uncut grass, scrub and piles of rotting wood to provide food and shelter, this could help hugely. “There are pockets of ideal habitat in many towns and villages,” Fay adds, “but often they are cut off from each other. If homeowners cut a CD-sized hole in their fence or wall it can link them up to create something which is better than the sum of its parts.”

Reducing or eliminating agri-chemical use would also be hugely beneficial. Although Fay concedes the evidence of harm from slug pellets is patchy, she urges gardeners to try to work as organically as possible and says that if such steps are widely adopted, the sight of trundling prickly balls could once more be a familiar sight in every field and garden.