Welcome back to Wales 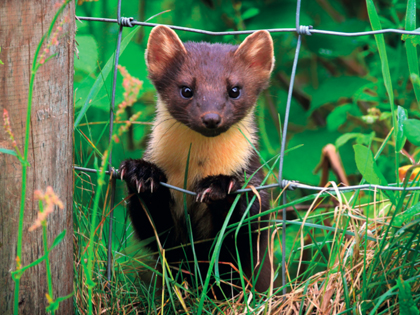 Once prolific, sightings of the pine marten in Wales are now rare – but that is set to change, with a project underway to restore this delightful predator to our woodlands

“We think there’s probably still a native population in Wales but this is based almost entirely on the handful of credible sightings we get each year. We’ve very little concrete proof and felt the time had come to do something about it.”

David Bavin, of the Herefordshire-based Vincent Wildlife Trust, is talking about his passion – a lithe woodland hunter that was once one of our commonest predators. Until 300 years ago pine martens were found everywhere, even in towns, but Wales was a particular stronghold. Yet for the past half century there has been a question mark over whether they even exist in the Principality. Over the past 40 years there have been few ‘hard’ bits of evidence: a ‘scat’ (dropping) from Devil’s Bridge in 2007 and a road casualty near Newtown in 2012.

“These signs are persuasive but are they genuine Welsh animals?” muses David. When tested, both showed Scottish DNA. “There are two main scenarios: that they’re here in very low numbers; alternatively, there may have been sporadic private releases drip-feeding them in from Scotland.”

He believes the truth is actually likely to be a mixture of the two, with a handful of released animals bolstering the vestigial Welsh population. This isn’t as far-fetched as it might appear. In the past, things were less regulated, and conservationists – including some Forestry Commission (FC) rangers – moved a variety of native animals around the country. This included an official FC translocation of martens from the Highlands to Galloway in the late 1980s.

“This was sanctioned, but not very scientifically orchestrated,” David explains. “They set a few animals free and these have done much better than one might have expected.”

While martens are our rarest mammalian predator today, this wasn’t always the case. In the 18th century, they were found all over Britain, but then their range receded dramatically. By 1900 they were, effectively, extinct in England and rare in Wales thanks to the Victorian mania for shooting and the resulting persecution of all predators. The loss of woodland habitat compounded the problem (in 1900, Britain had only five percent tree cover).

Fortunately for the marten, the First World War dealt a hammer blow to the way our land is managed. The loss of a generation of young men – particularly the upper-class officers who led from the front – saw a dramatic decline in the fortunes of the great shooting estates. And in 1919 the Forestry Commission was set up to supply pine pit props for the coal industry. With less persecution and more trees, martens began to climb back in Scotland. But things had gone too far along the Pennines and in Wales. Here, numbers were so low that the remnant populations could only cling on at best.

The exact picture was (and remains) confusing, not least because it’s particularly difficult to monitor rare nocturnal animals that spend much of their lives in the canopy. Thus researchers rely on camera traps and searching for scats. These should be relatively easy to find because martens mark their territories with droppings. Footprints, hairs, prey remains and road accidents should also confirm their presence but, apart from the Devil’s Bridge scat and Newtown road casualty, no concrete proof has emerged in 40 years. That said, every year there are a dribble of credible sightings along the Cambrian Mountains, but many could be cases of mistaken identity. Three relatives – polecats, mink and otters – are similarly-sized and fairly common in the same area.

Description: Rich, chestnut brown, with a pronounced yellow ‘bib’ on the throat. Males are bigger, growing up to 80cm long (including tail) and weighing 1.7kg.

UK population: About 3,500 in Scotland with a few along the Pennines and possibly a vestigial population in Wales.

Habitat: Usually associated with trees but sometimes found on open hill or moor. Territories vary from one to 20 square kilometres, depending on quality.

Reproduction: Mating is in July/August but implantation is delayed until February. Typically, three cubs are born in March, remaining with mother for about four months.

For lovers of wildlife this is a tragedy because this arboreal weasel is one of our most attractive hunters. It has a glossy, chocolate-brown coat with a pale yellow throat bib and readily scampers up and down trees on its largely nocturnal hunting trips, sleeping by day in hollow trees, disused crow nests or abandoned squirrel dreys.

Apart from its readiness to climb trees and a more omnivorous diet than most members of the weasel family, they follow the clan’s general habits. They are territorial and solitary for most of the year, pairing up only to mate in July or August. Implantation is delayed until February and is followed by the birth of around three kits in late March, usually in a den hidden in a rocky fissure.

The success of the slightly haphazard experiment in Galloway persuaded the Vincent Wildlife Trust and People’s Trust for Endangered Species to mount a more carefully structured release near Devil’s Bridge. “We chose Cwm Rheidol because it’s got loads of quality habitat and, perhaps more importantly, very good connectivity with other promising areas,” he explains. 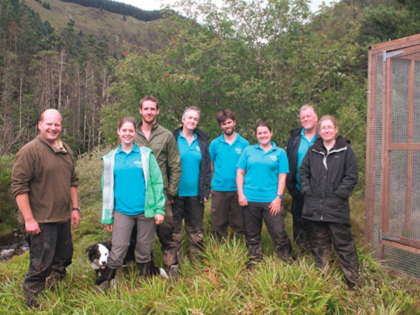 Above: Staff from the Vincent Wildlife Trust and Chester Zoo. A team from the zoo, a registered conservation charity, built the bespoke release pens, pictured, for the pine martens and joined the Trust to set them up at the release sites in Mid Wales

Despite the name, martens like a wide mix of habitats. They certainly live in conifer woods but actually prefer the richer hunting grounds of broadleaves and are also quite comfortable on mountains and moorland. The reason for the name is to distinguish it from a close Continental relative, the beech marten. The latter is slightly more common in the broadleaf forests of Central Europe while our species is more prevalent in the conifer woods of Scandinavia.

The other reason for picking Cwm Rheidol is that this was the last confirmed location of a Welsh pine marten. “We released 20 animals from the Highlands in pairs last autumn and another 20 will be released this year,” continues David.

The animals are being radio-tracked so he knows the first batch is doing well. “We expected them to move away fairly quickly from the release site and we actually wanted this but we hoped they wouldn’t move too far. Our worst case scenario was 30-40km but the furthest is only about 14km from the release site.”

On the downside, two have died from disease and one was killed, probably by a fox. This is obviously disappointing but it’s actually better than a predicted mortality of six. Better still, it seems two females had litters this spring.

This early success is good news for foresters and farmers, as martens find grey squirrels easy prey. “Because martens don’t exist in grey squirrels’ American home range, they haven’t evolved defensive strategies and the martens find them easy to catch,” says David. In contrast, the endangered native red squirrels have spent countless centuries escaping this arboreal weasel and, being smaller and lighter, can flee to the safety of the highest, thinnest branches.

“Martens are certainly predators but they pose very little risk to livestock or game,” he continues. “Certainly in Wales they will be much less of a threat than the far more numerous foxes, badgers, polecats, goshawks, ravens and crows.”

Martens could be beneficial to farmers, foresters and shooting interests because they seem to relish pest species such as grey squirrels and rabbits and love the eggs and young of pigeons, magpies and crows. With no shortage of any of these in Wales – and in the absence of persecution – there is every reason to hope this beautiful predator will once more reclaim its ancient strongholds in our wooded valleys.