Our glorious wild-flower meadows are disappearing. However, in Raglan, two precious sites have been saved

Few sights are more reminiscent of British countryside than a wild flower-rich meadow alive with the buzz of bees and other insects. Once abundant throughout the Welsh Borders, these sanctuaries for flora and fauna have declined by more than 97 percent since the Second World War. The fate of those that remain hangs in the balance as more and more land is used for development and agriculture – or simply neglected.

Happily, conservation groups and wildlife trusts are attempting to change the fortunes of these precious eco-systems. One such organisation is the Monmouthshire Meadows Group (MMG), a small, charitable trust that, after nearly a year of tireless fundraising by members – and thanks to personal donations and grants from various trusts, including the Banister Charitable Trust, the Foyle Foundation, New Grove Trust and Alan Evans Memorial Trust, and £45,000 from the Biffa Awards – has managed to raise the £96,000 needed to buy two traditional flower-rich meadows at Kingcoed near Raglan, securing their future.

This achievement is the latest for the community-run group, who have spent more than a decade working throughout Monmouthshire to preserve, protect and restore flowering hay meadows. Dr Stephanie Tyler, a retired zoologist who has worked for the RSPB and wildlife trusts, is MMG’s chairperson and was one of the founding members.

“A few of us like-minded individuals were getting exasperated by the lack of management of meadows in the area, especially when we had so few, or the fact we were still seeing meadows being ploughed up and re-seeded. There was a classic example near me, a beautiful, sweet wild flower meadow; I was so upset to see it go,” relates Stephanie, who lives in Penallt and is joint vice county recorder for the Botanical Society. “We got together and held an open meeting in Trellech in January 2003 and were amazed by how many people came to it. That was the beginning of the Monmouthshire Meadows Group. Now we’ve got about 200 members, most of whom have land, from 0.5 to 50 acres.” 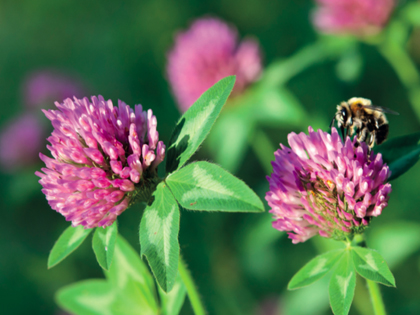 Above: meadow plants such as clover attract bees and other insects

The group, which started in the Trellech Plateau but now has members in Monmouthshire, Worcestershire, Herefordshire and south Powys [Breconshire], aims to help people restore and manage their meadows. If a grassland site is simply left, coarse grasses dominate, plant life is lost, wild flowers are out- competed by vegetation, brambles and scrub take over and, too soon, the grassland has become woodland. “A lot of people come into the countryside, buy a little bit of land and haven’t a clue what to do with it. We go out and carry out a survey of every new member’s land and advise them how best to enhance it, to attract bees and butterflies. We provide them with seed, explain how to look after it and even put them in touch with local contractors and farmers who have the appropriate machinery or stock.”

In the past 12 years, the MMG have helped transform the region’s landscape, creating new meadows, restoring old ones and encouraging mini meadows in gardens and public spaces.

So why are meadows so important? “If you take a look around the Usk Valley and its bright green fields, its well-managed hedgerows with everything sprayed to the edge, there are no flowers left in the landscape except those alongside road verges and the odd steep bank that’s escaped,” explains Stephanie. “Both honey bees and bumble bees have suffered so badly from intensive agriculture and use of various herbicides and the lack of flowers in the landscape – meadows provide a really good refuge for bees and other insects; they contain the plants they like, such as clovers and bird’s-foot trefoil, which allow them to get pollen. But all is not lost because you can restore meadows, given time,” she continues.

“It’s wonderful the MMG has raised the money to buy Kingcoed Meadows. We’ve lost more than 97 percent of our hay meadows in the past 60 years and it’s reassuring to know that this natural gem is now in safe hands.” Iolo Williams, TV wildlife presenter and Welsh Border Life columnist

This is something they’re doing with the Kingcoed Meadows, which will, in the fullness of time, have paths and be open access so others can appreciate their beauty and see what can be created given the right management. The two six-acre hillside sites near Raglan are fine examples of meadows, having been owned by MMG members who spent the past 13 years restoring them and making them more species rich. “They’d done a tremendous job but had to sell the land and we didn’t want it to fall into the hands of a farmer who’d agriculturally improve it,” says Stephanie.

“The beauty of the fields is really in May/June/early July when all the fine meadow grasses are out. In amongst them are a wealth of wild flowers, such as knapweed, bird’s-foot trefoil, yellow rattle, spotted and southern marsh orchids and red clover, which is great for bees,” she smiles. “But it isn’t just for the flowers, it’s for the whole meadow wildlife, all the grasshoppers, the spiders. If you go into a rye grass pasture, it’s silent and dead but walk into a real meadow and it’s alive, you can hear it.”

For further information about the Monmouthshire Meadows Group or if you’d like advice on looking after or restoring meadowland, visit www.monmouthshiremeadows.org.uk