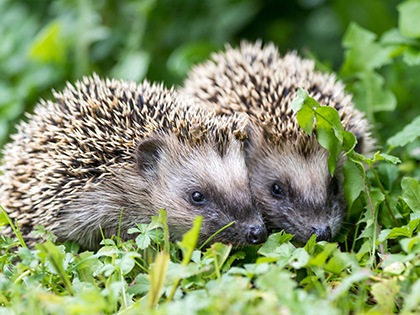 Amorous hedgehogs are thriving during lockdown, thanks to reduced traffic

There are very few winners from the coronavirus crisis, but our British wildlife appear to be loving these quieter conditions.

With fewer vehicles on the roads because of the lockdown, the mortality rate for hedgehogs was reported in one study to have halved. Figures from Nottingham Trent University showed between the last week of March and the first week of April 140 road deaths were recorded, compared with up to 381 for the same period in 2019.

What’s more, not only are more hedgehogs living longer but they're indulging in noisy lovemaking, according to wildlife experts.

Michael Walker, a mammal recorder at the Nottinghamshire Wildlife Trust, said people had been sending him videos of ‘randy’ hedgehogs.

"Hedgehogs have become extremely active and people are noticing them more in their gardens," says Michael. "I’ve even had a video sent to me of a male pursuing a female . . . very noisily."

“When two males are involved, it can cause quite a commotion with even more huffing.”

It’s not just our roads where hedgehogs face injury, however. Fay Vass, chief executive of the British Hedgehog Preservation Society, says the rise in gardening during the lockdown could itself put hedgehogs at risk, and gardeners are advised to take more care when using lawnmowers and to check compost heaps before plunging a spade or fork into them.

"People have more time at home so are tidying gardens, moving sheds or getting the strimmers out," says Fay.

But the good news is the Society are also seeing evidence of a marked increase in numbers of our spiky friends. "Our phones are very busy with people calling having found hedgehogs in the garden or looking for advice on what to do," Fay adds.

If you find an injured hedgehog or want general advice on how to help the species, visit: www.britishhedgehogs.org.uk

Iolo Williams - Iolo extols the virtues of hands off gardenin...

Iolo to the rescue - Iolo Williams offers his expertise on a reade...

Iolo is back, in Welsh Border Life - From adders to Egyptian geese, it’s&nbs...