If the ‘lifting’ of restrictions in Wales wasn't what you had in mind, try these…

Well thanks for that Mark Drakeford. We waited with bated breath and… Five miles. That’s as far as us in Wales are allowed to travel to see family and friends.

One wonders whether the esteemed First Minister has been north of Caerphilly since the war. Coz out here in proper Wales, five miles will take in a few fields, a few hundred sheep and a disused cow shed at a push. It isn’t even enough to get me to Lone Wolf’s in the next village, let alone to Powis Castle if I wanted to test my eyesight for some perfectly valid reason.

Meanwhile the English are marauding up and down the motorway network on the other side of the Border, enjoying days out from Land's End to the Lake District. But not the Brecon Beacons, of course. Oh no you don't.

You know what I'm thinking? That this is some sort of belated revenge for Offa’s Dyke.

Anyway, be that as it may, Drakeford has probably got a point in trying to keep Dominic Cummings and all the other plague-carrying zombies out. The problem is, his delivery of such mandates is - how can I put this kindly? - about as rousing as viagra on a eunuch.

Say what you like about Bozzer Johnson - and they do say it - but when he’s tub-thumping on his soapbox he has a way of carrying people with him who don’t necessarily want to be carried. Whereas Mark Drakeford - as avuncular a chap as he no doubt is - would struggle to carry a wet lettuce home from Lidl.

I’m reminded of England boss Gareth Southgate’s verdict on a team talk by then national manager Sven Goran Eriksson at half-time during a World Cup Quarter Final against Brazil in 2002. Brazil had equalised minutes before the break, taking the wind out of England’s sails, and the Swede prepared to rally his troops. “We needed Churchill,” said Southgate. “But we got Iain Duncan-Smith.”

Right now, in Wales, if we’re to stand defiant as a Cambrian Mountain against the sickly souls milling around the Border with intent, we need Owain Glyndwr. But we’ve got Lembit Opik. After an exhausting night with a Cheeky Girl.

And is it me or is everything they come up with down in Cardiff the same as what comes out of Downing Street, but just a bit more Welshy?

Who knows? But in the spirit of such Celtic non-conformity, we here in the devolved administration of Llanyllanllan have held a meeting in the old phone box at the end of the road (where admittedly social distancing was a bit of an issue) and come up with our own rules.

So quiet down please, as there’ll now be a statement from First Minister Sheep:

“Calm it everyone. Chief scientific advisor Professor Wolf has now finished playing with his chemistry set and I can confirm that the R number round these parts is somewhere between -10 and 27. This means we can now move to Level 3 of Stage 4 of the Llanyllanllan Lockdown Restrictions. Which are:

1. You can now meet up with as many other households as you like, in a group of no more than two people, as long as you stay two miles apart and one of you is wearing a deep-sea diving outfit, coz we’ve run out of PPE. I know.

2. If you haven’t got a car you can drive anywhere you like. But car owners must Stay Home and look after their vehicles during this difficult time. Cars have feelings too, you know.

3. Innit lovely out there? Well, you are now allowed to sunbathe in parks and cemeteries, but you must wear sun protection made by a gin distillery in Llandewi Breffi. There must be one. (Although it might be closed in these uncertain times.)

4. You can cycle with a friend or relative or a complete stranger, but you must be able to keep up with them at all times. And his name must be Geraint Thomas.

5. Whatever you do, don’t cross the Border into England, where admittedly they’re having a much better time, as we don’t want to give them the satisfaction.

6. All beauty spots must be removed by a plastic surgeon. Sorry about that, but these are unprecedented times.

7. You can get married. By Zoom. To a Cheeky Girl.

8. Non-essential shops such as the doctor’s can now open for business as long as they have social distancing stickers everywhere that tell you to bog off until Professor Wolf has finished making his vaccine. Which is coming along nicely, thank-you. But he needs a few more newts, if anyone’s got any going spare.

9. All schools are to reopen, but they are to be renamed workhouses and kids won’t be allowed home. Ever. These are desperate times, remember.

10. Oh, and the tip is still shut. If you have any rubbish you want to get rid of, we’ll let you drive to England just this once and you can dump it there. Under a tree somewhere.

That's it. No questions. Especially from you Kuenssberg.

We thank you for your cooperation at this time of strange times and ask you to remember: 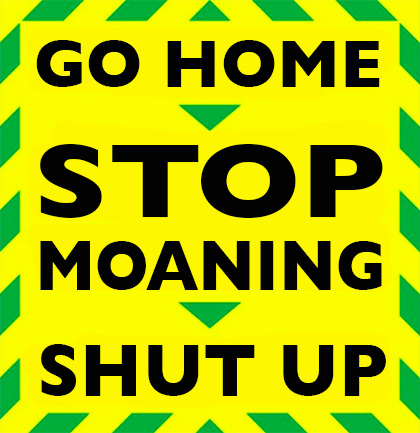 A mutton for punishment, Black Sheep welcomes all comments. Email blacksheep@borderpublishing.com to air your points of view. You can also read Black Sheep in Welsh Border Life every month. Well, not at the moment, obviously...

You can keep your Costa, sunshine - What is it with this sudden obsession to get ...

Dig for victory - Is trench warfare our last hope for decent br...

Hogs of war - Just when you thought it was safe to go out f...

All white on the night - Remember that load of old nonsense I wrote ab...

Every little thing is gonna be alright - All hail for Black Sheep’s New Year add...