Retire to the coast

The increase in life expectancy means that more of us are enjoying a long and happy retirement, with many people choosing to spend it by the sea. But is moving to the Welsh coast really a fairytale ending – or a fantasy?

People in Wales are living longer than ever before, leading to a growing generation of silver sea-seekers wishing to retire to the glorious Welsh coast. But what’s it really like to live the dream many of us aspire to? There’s a perception that moving to the coast in our later years is just a retirement home with a sea view. But according to some retirees, this couldn’t be further from the truth.

One of them is 78-year-old Bernie Holden, a semi-retired professional musician and war evacuee, who’s just taken up a new hobby – kayaking on the River Ystwyth. He spends half his time at his partner Carolyn’s home near Aberystwyth, West Wales, and the other half in London, where he was born and where he was a regular act at Ronnie Scott’s Jazz Club earlier in his career.

“I guess we have the best of both worlds,” says Bernie. “We live near the river on the Welsh coast and I’ve often thought I should make more of it. So I’ve just bought a kayak and I’ve had a few goes kayaking on calm days. They advise you not to go out alone so I try to pair up with like-minded people.”

Bernie is loving his new life, which appeals to his spirit of adventure. But he admits his new hobby is a far cry from life as a clarinettist or when he worked as a chartered surveyor.

“I started playing the clarinet aged 13,” he tells us. “I was quite musical and played piano so the school orchestra snapped me up. I was gigging at 16 and later appeared on Pete Murray’s Six-Five Special along with the Carry On comedian Bernard Bresslaw.”

Bernie’s parents bought a house in Essex in 1938, just before the Second World War. “I was evacuated twice during the war, like most kids,” he says. “Firstly, I went to a country estate in Gloucestershire, with my older sister, Shirley, for 18 months. War had been declared and we thought Britain was going to be bombed.

“I was among many children who were evacuated out of the big cities but nothing seemed to happen, so we all went back again. They called it the phoney war because it hadn’t really started back then. It wasn’t until The Blitz that children were evacuated again.”

Bernie met Carolyn when he was about 40 years old. She was born in Ceredigion and her roots were in and around Aberystwyth (pictured above). Her late parents had the same house that had belonged to her grandparents and when the house was sold, Carolyn bought a second house south of Aberystwyth near Llanilar.

“The views are absolutely stunning here,” says Bernie. “Living in London is pretty smoky and I don’t think it’s particularly good for one’s health. We benefit from the healthy sea air and walking a good hour every day. Plus, there are the most beautiful sunsets across the sea.” 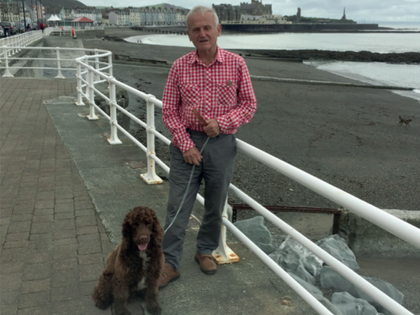 Above: Bernie Holden combines walking his dog Buttons with teaching music and kayaking

Bernie has two sons, Philip (51), a climate-change research fellow at the Open University, Milton Keynes, and Keith (49), who lives in Ibiza with his Spanish wife.

“They’ve been to visit us and they do love it here, too,” says Bernie. “I combine coastal walks with our dog, Buttons, with teaching music to a local pupil who is doing very well. And I’m gigging with musicians in London one week and on the Prom in Aberystwyth the next – who says I’ve retired?”

While many of us just dream of living by the sea, after many years of trying it’s become a reality for Frank Harvey, aged 73, and his wife, Liz. The couple had always dreamt of retiring to live at the seaside. So, following the end of their careers in education in The Midlands, there was nothing stopping them – apart from finances.

“I was born in Stafford and for most of my life I worked as a teacher in Staffordshire,” reveals Frank. “I met my wife, Liz, in college and she worked as a school secretary.

“I had to finish work early because of eyesight problems and we moved halfway to the sea to Guilsfield, near Welshpool in Mid Wales, in 1987.

“My wife is from Church Stretton in Shropshire and is very much a country person. We enjoyed the woodland walks and with no children, walking our dog was the big thing. We loved the village.”

Although the couple were happy, they still wanted to move to the seaside, but found the cost of the properties they fancied prohibitive.

“We moved closer to the sea gradually,” explains Frank. “We kept looking at coastal properties but it was hard to find one at a reasonable price.

“After years of house-hunting, we finally moved to Criccieth on the Llyn Peninsula a few years ago when we found a dorma bungalow more or less the same size that we were living in. It faces east-west so we can see every sunset.

“Criccieth is a fantastic place to be and we’re literally yards from the sea, with magnificent mountains all around and the castle nearby, making a marvellous backdrop. The air is very fresh, too, and the light is remarkable – Liz captures it in her paintings. 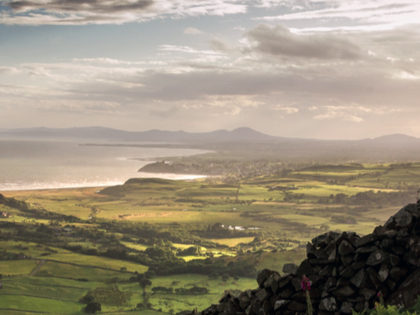 Above: Criccieth lies on Cardigan Bay in North-west Wales, just five miles from Porthmadog, and offers retired couples plenty to do – including enjoying time on heritage railways such as the Ffestiniog Railway

“At the moment we’re busy working on our bungalow and the gardens but we often drive out to Snowdonia and up to Llanberis when we get the chance, mainly out of season when it’s less busy. We’re just a 45-minute drive from some wonderful places – Anglesey, Caernarfon and Bangor – so there’s no shortage of trips out.”

Frank’s passion is his model railway in the couple’s back garden. And living where they do means he can enjoy frequent trips to two of Wales’ coastal heritage railways: Ffestiniog Railway and the West Highland Railway. He thinks that one of the secrets to a happy retirement is getting involved with the community and volunteering with local charities or projects.

“We’re involved in looking after Saint Cynhaearn’s Church, Ynyscynhaearn, who, coincidentally, was the brother of Saint Aelhaearn, the saint of Guilsfield Church, near where I used to live,” says Frank. “This small church in the middle of nowhere is consecrated but is pretty redundant so is part of the Friends of Friendless Churches charity. The former parish church, it’s historic so we like to keep it clean, visit it and help keep it going.”

Bernie and Frank are shining examples of how age is no barrier to a fulfilling and active life, and retiring to the Welsh coast, for them at least, was the beginning of a whole new adventure.