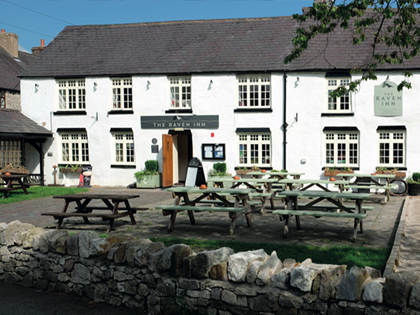 A growing band of motivated, entrepreneurial volunteers along the Welsh Border are taking the fate of their communities into their own hands to safeguard traditional local services

In an age of austerity, when even large retailers can be susceptible to volatile conditions, three community-run businesses have sprung up along Offa’s Dyke to show how people power, teamwork and goodwill can save local shops and pubs, helping to preserve the character of the Welsh high street.

Llanfechain Community Shop near Welshpool in Powys is a company limited by shares with four directors and a management committee of 10, who have been running the shop and post office at a profit since 2009.

“One thing that’s taken us all by surprise is the social impact the shop has had on the village, which is above and beyond anything we could have anticipated,” says managing director Dick Row.

“People are astonished by how much we sell and we’re quite competitive with the big stores and neighbouring village shops. All profits are donated to the village community centre with any surplus going into developing our footfall. For the past two or three years, we’ve donated £1,500 each year and we retain money for future development, to keep things ship shape.

“The shop gives us a great deal of personal satisfaction because we’re creating a village service that’s for everyone,” he adds. “Pensioners who can’t get in the car to go to Welshpool or Oswestry really appreciate us being here. We’re used by many people in the village; even if some of them don’t come in very often, they say they appreciate the wonderful job we do.”

Dick, whose background is in education and industry, says that, ultimately, the buck stops with him.

“If there’s a dirty decision to be made it’s me that will make it and carry the can,” he says. “We have a viable business based on volunteers who don’t mind not getting paid. Some people don’t understand why anyone would work for nothing. It does eat into your time and it can be onerous to be open every day of the week apart from Christmas Day. But we have our own training programme and when volunteers feel confident and competent, they can work on their own, have further training or have references for other jobs. 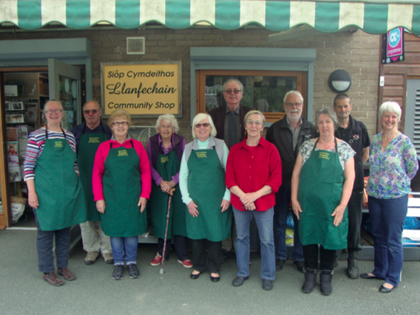 Above: Profits from Llanfechain Community Shop near Welshpool – which is run largely by volunteers – are donated to the village community centre

“One thing we didn’t expect was such a high level of turnover of volunteers – we’ve had about 20 staff move on over the five years,” continues Dick. “We try to utilise the strength of each volunteer so that they can bring in their experience and expertise. A difficulty arises when some volunteers can go weeks of shift working without seeing each other but if there is an issue, we try to work with it and get a group spirit. It’s all about communication.”

Dick’s wife, June, is also a volunteer at the shop. “Prior to starting up the business, which is at the end of its fifth year, four of our volunteers went to visit a couple of small community shops in Shropshire: one at Lydbury North; the other near Craven Arms. We looked at problems they experienced to see if we could avoid making mistakes,” she says. “They continued to give us direction as we opened up.”

Dick says the shop has become much more than a business; it’s now the hub of the community and the ‘centre of all knowledge’.

“Yes, there is village gossip,” he admits, “but word of mouth at the shop lets us know about new residents arriving in the area who may wish to volunteer and we can be a collection point for parcels or for special messages to be passed on.”

Volunteers don’t have any perks such as discounts but the staff have a Christmas meal paid for every year, usually at Plas Yn Dinas Inn, in the village.

Further on up the Border, Terry Ford is landlord of the Raven Inn (main pic) in Llanarmon-yn-lal, Denbighshire, which was built in 1722 and was originally a drover’s inn; it closed in February 2009. However, with support from Pub is The Hub, a Prince of Wales initiative set up to combat the closure of almost 30 pubs a week across the UK, an army of volunteers got together to save the Raven Inn from the claws of permanent closure.

It re-opened six months later and is still run by the community and staffed by volunteers. As well as being a CAMRA (Campaign for Real Ale) award-winning pub, the Raven serves fresh food made using locally sourced produce.

In a community-run pub, laughs Terry, you never know who is going to pull your pint – your neighbour or royalty.

“In July 2015, Prince Charles and the Duchess of Cornwall visited the pub and went behind the bar to pull a few pints,” Terry says. “They took the time to shake hands and chat to everyone. It was a day we shall always remember.

“This is one of the friendliest pubs that you’re ever likely to come across. Our aim is to have you feeling like a ‘local’ before you leave,” he smiles.

“Fallouts are few and far between. Some of the positions in the pub are paid. For example, the chef is salaried and we employ local teenagers, aged 16 to 18 years of age, as waiting-on staff. This gives them valuable work experience and extra pocket money. The cleaners are paid and key bar staff at weekends. The remainder of staff work voluntarily and wouldn’t do so if they didn’t enjoy being part of the team effort.

“There isn’t one overall boss. This is very much a collaborative effort, which has worked well for the past seven years.”

Collective determination led to another close Welsh community buying their local pub to prevent it being turned into a ‘faceless’ supermarket. Former punters at The Corn Exchange in Crickhowell in the Brecon Beacons raised half-a-million pounds to buy the High Street building from operator Punch Taverns to create independent shops and flats. 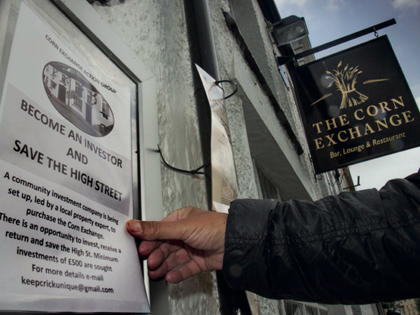 Above: Half-a-million pounds was raised so Crickhowell’s Corn Exchange can be turned into independent shops and flats instead of a supermarket © Tim Jones

“To stop the plans for a supermarket thousands wrote, signed petitions, protested and attended meetings,” explains Tim Jones. “I ran the media and publicity to turn opposition into concrete proposals to secure a new future for the building.

Businessman Dean Christy negotiated the sale with Punch Taverns, set up Corn Exchange Crickhowell Ltd and oversaw the issuing of shares and crowdfunding of more than half-a- million pounds. Three-quarters of the people who invested in the company live within 15 miles of Crickhowell, with 78 percent putting in £2,500 or less, making this a truly local and democratic process, not the whimsy of a wealthy few.

“Accountant Peter Roberts and project managers Andrew and Claire Gray are now delivering the redevelopment project, which has created one job. When the shops open, we could create six jobs, along with much-needed one-bed flats.

“We need planning permission and listed-building consent this autumn (2016) and the building work will be finished by next summer. The community has come together with such passion and skill, not just to protest but to find positive solutions to its problems.”

“With the help of local businesses, we were able to spread the news of the proposals for the supermarket quickly, and swiftly organised a protest outside the Corn Exchange,” adds Emma Bevan, co-chair of The Corn Exchange Action Group (CEAG). “We had a common goal and became friends very quickly. The group ran itself well with no real hierarchy, just brilliant planning and ideas and motivation. We never considered payment. The rewards are speaking for themselves. A small town, full of warm-hearted and determined residents and businesses, fought and won the right to retain an independent high street.”