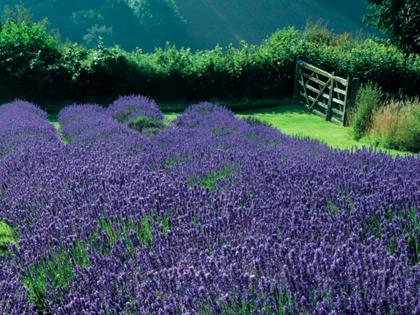 For someone who once described themselves as “not a farmer, not even a gardener”, Nancy Durham has managed to turn her casual hobby of growing lavender into a successful brand of lotions and balms that are sold in some of the UK’s hippest boutiques.

Her Farmers’ Welsh Lavender products have even caught the attention of supermodel Helena Christensen who called the hand cream her “secret weapon” in a magazine article about her favourite beauty products.

But it’s been a steep learning curve for the former journalist, who’s worked on everything from BBC Radio 4’s Woman’s Hour to filing video reports during the Balkans conflict.

“It’s wonderful when you get great feedback, like the GP who returned to buy more jars of our calm balm after it cleared up her daughter’s eczema. Or the farmers’ wives who tell me our foot cream sorted out their cracked heels in just a couple of weeks,” says Nancy, 64, who has two step-daughters and seven grandchildren, as well as her burgeoning business.

“However the early years were quite daunting. There was so much to learn about the business of packaging, testing, and labelling, never mind the actual product in the pot. But I liked the challenge and treated it like doing research for a difficult story.”

Nancy first moved to the UK from Canada in the 1980s after meeting her husband Bill Newton-Smith, a philosophy lecturer at Oxford University. “Journalism is more portable than Oxford,” she laughs.

Bill had bought a farm called Cefnperfedd Uchaf in Builth Wells as a weekend retreat back in 1974, but the couple continued to live at Holywell Manor in Oxford through the week. Although it only had a small half-acre paddock at the time, they bought six acres of additional land around the farm in 2003, without giving much thought to its future use. 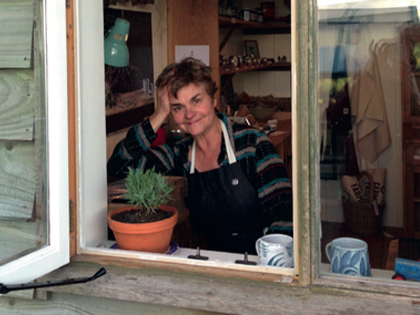 Above: Nancy Durham in her shop on the farm - her casual hobby has given rise to a highly regarded range of cosmetics

After casually mentioning to a farmer neighbour that she wanted to plant some lavender, Nancy was encouraged to apply for a £1,000 diversification grant from the Welsh Assembly which was just enough to plant her first field of 2,000 lavender plants.

“We didn’t have a business plan as it was just for fun initially,” says Nancy, who discovered the steep hills were ideal for drainage and chose hardy varieties to thrive in the wet, windy climate.

“It was also a lovely antidote to my career as a journalist.”

For about five years she sold dried lavender to local shops but “never made a penny” until she met Helen Lowe, a leading artisan in body care products and the sister of her friend Hilary Lowe.

“Hilary’s a smart design person who specialises in finding beautiful things made in Wales that aren’t furry red dragons,” says Nancy. “And Helen used to work at G Baldwin & Co in London, the oldest herbalist in the land, so she has huge experience of creating things from scratch, including her own line of creams called Laughing Bird.”

As scientific studies show the scent of lavender reduces anxiety, helps people unwind and can even boost memory, it seemed the perfect ingredient for a range of beauty products. After Nancy had got to grips with distilling lavender oil in an old farm building, Helen was able to start putting together a range of creams in her Anglesey farm overlooking the Menai Strait.

But the idea for the brand name was sparked by a talk Nancy gave to the Wye Valley Grasslands Association.

“I was quite nervous so I brought along jars of body creams that we were experimenting with at the time,” she recalls. “It was ladies’ night and I thought they might like to try them. To my astonishment, so did the men. Afterwards they told me about the challenges of working in all weathers and one of them held up his hands after slathering on the body cream and said ‘look, now they don’t smell like silage!’ They loved the fact that the creams weren’t greasy either. On my way home that cold winter night I thought of the name Farmers’ hand cream.”

Not long afterwards Nancy took a big batch of aluminium pots to a summer fair in London and sold out within two days. It spurred her on to develop a whole range of products which now includes foot cream, a scrub, body lotion and all over wash, as well as lip balm made using honey from the farm’s own beehives. There’s even a lavender chocolate bar. 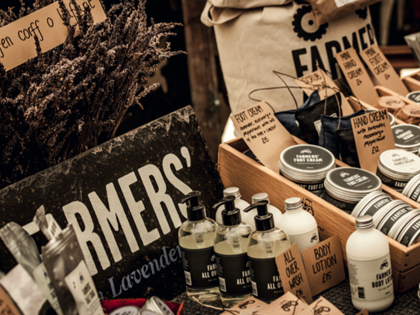 “Although our customer base is more urban, I always return to the farmers when developing products,” she adds. “They’re up at the crack of dawn and out there in the last light of the evening, tending lambs and sheep in all weather. It was the farmers’ wives who encouraged me to make a foot cream, as farmers live in wellies and don’t look after their feet.”

Now Nancy employs two full-time and seven part-time members of staff to harvest the lavender, distil the oil and pack the finished products. July is harvesting month for decorative varieties cut manually with sickles, while oil producers are cut in August with a Japanese tea plucker. “It’s like a hedge trimmer with handles on each side,” says Nancy. “Two people carry it, and a third holds the large silky bag the flowers are blown into.”

One basket containing 15 kilos of Grosso lavender can produce 100 to 250ml of oil, which is distilled every day throughout August using the traditional steam method common in France. “When the filling machine is in action the room has the most wonderful scent,” she says.

As lavender oil improves with time, it’s stored in a wine cellar before being sent to Helen, who designs and makes the creams. She then sends them back to the farm in large tubs, where they’re decanted into the filling machine, labelled and dispatched.

As well as selling via their own farm shop, which opened in 2014, Farmers’ products are now sold in 80 to 90 shops around the UK as well as through Monocle stores in Tokyo, New York, London, Toronto, Singapore and Italy.

They’ve even been asked to make two bespoke balms for Ace Hotel in Shoreditch – a calm balm with lavender, chamomile and sandalwood, plus an uplifting Awake Balm with peppermint, eucalyptus and lemongrass – in addition to a salt soak made from Welsh sea salt.

Although customers can also buy online, Nancy believes physical stores will always be more important. “When people come into the farm shop, I’m like a sociologist watching the social shopping animal,” she enthuses. “They want to touch and smell the products, and the internet can never bring that.”

Perseverance and a lot of knocking on doors has been key to her success. “I’d been trying to get into a shop called The Foodie Bugle in Bath for three years, so I was thrilled when they finally placed an order recently,” says Nancy. “We have big ambitions but growth has to be at the right pace for us. You won’t find us in a department store any time soon – they want to beat the price down so low and it loses its specialness somehow.”

With the launch of a new eau de toilette fragrance and an eventual goal of turning the informal cuppa and cake offerings into a proper farm shop cafe, not to mention Welsh lessons in her spare time, there’s plenty to keep Nancy busy. 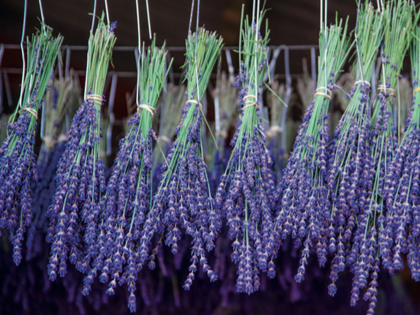 Above:Royal Purple lavender hanging to dry - the scent of the flower reduces anxiety, helps people unwind and can even boost memory

“We’ve called the fragrance Farmers’ 1100, which refers to the height in feet of the farm and it’s made using the lavender water which is a by-product of the distillation process,” she explains. “Like everything we make, it’s for both men and women, so it’s more of a robust, fresh scent and doesn’t smell too girly.”

Although Nancy admits the business has overtaken her life as she works seven days a week, it’s a price she’s happy to pay. “I love being an entrepreneur. I can’t stand the word retirement and will probably work till I drop.”

It’s clear the most thrilling aspects of Nancy’s venture have been nurturing a small team and learning new things every day. “Our little corner of Wales is crawling with creative people. For instance I was at a meeting for the new perfume box design and I learnt all about foiling techniques and debossing, which is the opposite of embossing. It may sound boring, but I found it incredibly fascinating,” smiles Nancy. “Never in a million years did I imagine my life would end up like this.

“I had a ball as a journalist but I’m having at least as much fun now.”

Farmers’ Welsh Lavender products are available at selected stockists across the Welsh Borders or online at www.welshlavender.com. Alternatively, you can visit the lavender farm and shop year round at Cefnperfedd Uchaf, Maesmynis, Builth Wells, Powys LD2 3HU. To arrange a visit, enquire about tours or for any other queries, tel: 01982 552467

Notes from a tiny island - With short days and vicious winds, December&r...