Notes from a tiny island

With short days and vicious winds, December’s a tough time to live on a lonely Welsh island. Yet it’s a month Lisa relishes

I’m not sure how I feel about spending December on Ramsey. The island hunkers down whilst the sea rages all around. The wind whistles over the plateau, swirls around the hills and funnels salt spray up and over the cliffs. There’s little doubt that the cold, dark days will test the resolve of any creature or human who dares remain.

And whilst I’m lured by the opportunity to curl up by the fire and indulge in the books I’ve been hoarding over the summer, I also have an irresistible urge to get outside. I want to experience the raw, unchallenged anger of a storm-force wind against my skin and be deafened by the noise in my ears. It’s exhilarating and makes me feel insignificant but very much alive. There have been occasions when I’ve been buffeted and blown clean over. Pinned to the floor unable to get to my feet or even onto my knees, I’ve resorted to crawling home on my belly like a soldier under fire, slithering along in my waterproofs.

Luckily, it’s only the dog that sees my pathetic attempt to right myself. He looks on in bemusement, coat billowing and lips flapping. He’s low enough to the ground to move around untroubled despite the 60mph gusts, although his pied ears are stuck fast to the side of his head in the vortex.

My chickens, however, are less than impressed. They like to take a morning walk down the hill from their cosy coop, where they dig and rummage around for insects in the shelter of the farmhouse, but if the wind picks up during the day, they’re helpless to make their way back as it gets dark. They just can’t make any headway against anything more than a gale and I’ve often had to carry them home to bed, one under each arm. 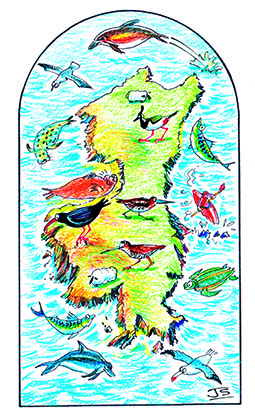 But as the storm abates and the weather clears, life emerges from hiding. The robins are once again ‘ticking’ from the bracken defending their winter territories and our tame blackbird demands sultanas at the back door, the fourth winter he’s taken food from an outstretched hand.

And there are happy reminders of summer from far offshore too; ocean wanderers returning to the island after months at sea. Fulmar petrels gather on the water around the harbour and make awkward landings, stiff-winged with feet out in front to break their speed.

And then, as the weather settles, something extraordinary happens. Out of the blue, on Ramsey’s sheer west-coast cliffs, ledges that have been deserted since the end of July are suddenly bustling and overcrowded. Guillemots are here. Thousands of them.

On sunny, calm mornings in winter these brown and white auks land en masse in a coordinated visit, the first time they’ve touched something solid since their chicks fledged back in the summer. They jostle for position and it’s standing room only as they socialise and guard their tiny space on the rocky cliff face. It’s a noisy gathering with the birds’ nasal giggling often the first clue that I have company. They look excited, and it’s exciting to see them, their sleek bellies shining bright and clean in the sunlight.

And then suddenly the party’s over. By mid-morning they’ve vanished, dropping fast and low off the cliff and back out into the Irish Sea until the next time, when everyone will be invited to attend for just a few short hours again.

The other large gatherings at this time of year are a less frantic affair. Grey seals return to Ramsey’s beaches in order to complete their annual moult. They come ashore in their hundreds on just two chosen pebble beaches and replace their fur coat over several weeks.

It’s amicable enough, although large males can get grumpy as they attempt to manoeuvre themselves into the best position. Despite the odd spat, it’s quiet as animals settle down for a winter siesta and as they dry out their coat lightens, making them very well camouflaged among the boulders. It’s only the intense musty aroma, created by many mature males, that reveals their presence. 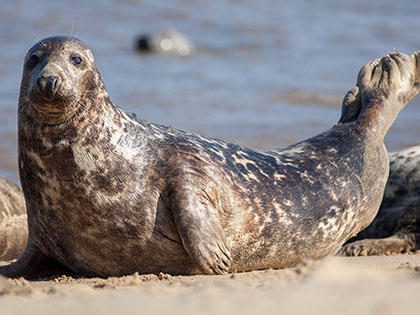 And despite the short days and fierce weather, I’ve always enjoyed spending Christmas on the island. It’s a great place to be if, like me, you want to bypass the retail bombardment and just appreciate the season. Pure escapism.

Calm Christmas Eve nights are magical, and I love to sit in the farmyard with its old pigsties and stone walls for shelter and gaze across Ramsey Sound to St Davids. Lights twinkle from houses and farms across the peninsula as the warm flickering light from my hurricane lantern twinkles back. I have head torches and powerful handheld beams, but a lamp on Christmas Eve makes the occasion special. And far off in the distance the bells ring out from the cathedral, the chimes carried across the water on a light breeze.

But my favourite is midnight as the new year begins and the island is witness to a giant free firework display, stretching in an arc around the coast of Pembrokeshire. The colourful flashes reflect on the water and the bangs and whizzes echo around St Brides Bay.

Surviving the last month of the year isn’t easy, but there’s a sense of achievement and belonging to this place that comes from making it through.

Lisa has been an RSPB Cymru warden on Ramsey and Grassholm islands, Pembrokeshire, for the past 13 years. She’s one of only two people who live on Ramsey year-round, and is often to be seen with her loyal sheepdog Dewi. Ramsey Island, off the coast of the St Davids peninsula, is rugged with some of the tallest cliffs in Wales. It’s known as a wildlife haven with populations of rare birds, plants and grey seals, and has been in the care of the RSPB (rspb.org.uk) since 1992.