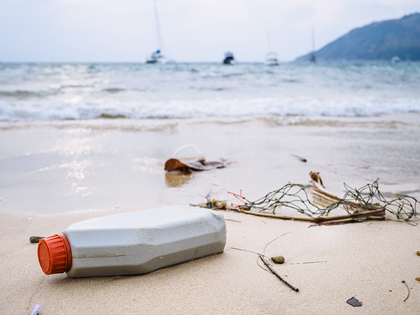 In a move set to warm the hearts of marine conservationists the world over, Unilever, the owner of Dove, Persil and many other household names, is to make all of its plastics fully reusable or recyclable by 2025.

Pressure has been mounting on the global giant, not least from its chief executive’s wife, with customers complaining about the company’s non-recyclable packaging. The Ellen MacArthur Foundation has also been working with the company to urge a rethink on packaging. According to the foundation, set up by the round-the-world yachtswoman, only 14 percent of the world’s plastic packaging is recycled, with 40 percent ending up in landfill and a third finding its way into the sea.

Speaking ahead of his company’s commitment at the World Economic Forum in Switzerland, Unilever chief executive Paul Polman admitted: “Plastic packaging plays a critical role in making our products appealing and safe. Yet it’s clear that if we want to continue to reap the benefits of this versatile material, we need to do much more as an industry to help ensure it’s managed responsibly and efficiently.” He added that his wife Kim was one of many who had become “irritated by packaging that couldn’t be recycled”.

Staggeringly, a refuse lorry full of plastic is dumped into our oceans every minute, and it’s estimated that by 2050 there’ll be more plastic than fish in the sea.

Roughly three percent of the world’s plastic packaging is currently produced by Unilever, though the company did stop using plastic scrub beads in beauty products in 2014, following concerns over the build-up of microplastics in oceans.

Microbeads are too small to be filtered by sewage treatment plants and end up in the ocean, where they are ingested by shellfish and plankton. One shower’s worth of gel containing microbeads can result in 100,000 beads being released into the environment, and it was this that lead the UK government to ban their use in beauty and personal care products from the end of 2017. However, the ban doesn’t extend to other products.

“It’s a credit to Theresa May’s government that they’ve listened to concerns from the public, scientists, and MPs and taken a first step towards banning microbeads,” said Greenpeace oceans campaigner Louise Edge. “But marine life doesn’t distinguish between plastic from a face wash and plastic from a washing detergent, so it makes no sense for this ban to be limited to some products and not others, as is currently proposed.”

In a consultation published shortly after its own announcement in 2016, the government observed that microbeads from personal care products make up less than 4.1 percent of all microplastics entering the oceans. A ban solely on those would “have only a small impact” it added.

More encouragingly, the 5p carrier-bag charge has been shown to dramatically reduce plastic waste. A Marine Conservation Society study published late last year claimed that the number of plastic bags on beaches had almost halved in the year since the charge was introduced.

You can contribute to a world where plastics don’t end up in our seas by joining the Marine Conservation Society’s Plastic Challenge and giving up ‘single use’ plastics. The challenge takes place throughout June 2017. For more information, visit www.mcsuk.org/plasticchallenge

Gold in them there hills - Miners strike gold worth millions in Snowdoni...

No Brainer for Marston's - After a turbulent few months and the prospect...

Look beyond the volatility - A message from our friends at Hartey Wealth M...