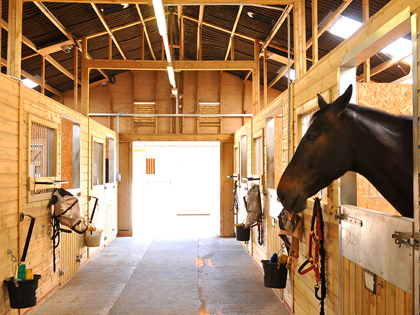 As if woeful broadband isn’t bad enough, rural businesses are set to be the biggest losers this spring, when new business rates come into effect following the biggest reform of the tax for a generation.

According to league tables obtained by The Times, riding schools, livery yards, stud farms, vineyards and livestock markets are among those set to see their rates soar, while bingo halls and photo booths will enjoy reductions in their bills.

All businesses on properties with a rateable value above £12,000 must pay the commercial equivalent of the council tax, as determined by the government’s Valuation Office Agency (VOA). That covers 1.8 million businesses, with government insisting the new rules will see a reduction in rates for 920,000 of them while only a “small minority” will incur an increase. That small minority, however, amounts to some 510,000 businesses, with a worrying number being rural enterprises and independent retailers.

Montgomeryshire MP Glyn Davies told The Times he could see a rebellion on the horizon.

“I can see this becoming a very, very big issue,” said Davies. “There’s going to be a bit of an uprising. If we see businesses closing… it’ll destroy local communities.

“Just what are the instructions to the district value assessors? They’ve got to go on actual rental value, not some notional value based on space.”

Rural businesses such as livery yards, kennels and vineyards typically occupy more space, and some see this as the reason why they’re being unfairly treated by a tax steeped in bricks and mortar rather than profitability.

The British Horse Society’s own calculations suggest riding centres throughout the country will see an average increase of 180 percent in their rates, and has launched a campaign demanding a rethink on the way the tax is calculated.

According to the new rules, Pembrokeshire Riding Centre’s annual bill is set to rise from £2,000 to £7,500. Owner Sue Scourfield, 66, has been hosting foster children and disadvantaged teenagers for over 30 years, helping young people excluded from mainstream education to secure City and Guild apprenticeships.

“We’re not turning out Olympic riders and fantastic showjumpers,” she told The Times. “We turn out young people who learn discipline and life skills. We’re not grand. If we make £3,000 a month, we’re lucky.”

The rateable value of the riding centre has risen from £6,500 to £13,750, but Ms Scourfield can’t see how. “If that was the case, I wouldn’t be working — I’d be renting the place out, sitting back and watching the money coming in.

“Of course everybody should pay their rates,” she added, “but there’s a moral aspect. The system has to be fair. Maybe we’ll survive this year but possibly not next year.”

The picture is similar in other rural walks of life. VOA figures point to increases of around 80 percent for vineyards and up to 86 percent for livestock markets. Even cricket grounds could see their rates increasing by more than 50 percent, while similar fears for independent retailers were unearthed shortly before the latest revelations. Inexplicably high business rates will force them out of business, retailers argue, just when our high streets need as much help as possible to cope with the introduction of the national living wage, and to counter competition from the internet.

The new business rates come into force this April. Exemptions include farms, fish farms and churches. Rateable values are multiplied by a figure set by the government to give the actual rates due. The revaluations of rateable values can be challenged, but appeals can take years and businesses must pay the disputed bills during that time.

Gold in them there hills - Miners strike gold worth millions in Snowdoni...

No Brainer for Marston's - After a turbulent few months and the prospect...

Look beyond the volatility - A message from our friends at Hartey Wealth M...