School poppy display with a difference

Abberley Hall School have just received the Certificate of Appreciation from Poppy Appeal Headquarters. This was in recognition of their stunning display of poppies trailing down the school’s clock tower for Armistice Day last November and for the money the pupils raised.

Children from Abberley Hall School, alongside parents, staff and people from the local community, spent eight weeks creating over 7,000 ceramic poppies which were trailed from the base of the school’s historic 161ft clock tower. 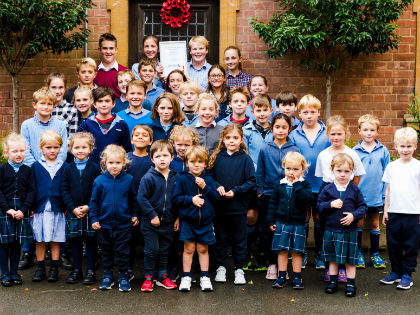 The project, which was led by head of art Emma Symons, is inspired by the famous ‘Blood Swept Lands and Seas of Red’ display which was erected on the Tower of London in 2014.

Abberley Hall’s head teacher Will Lockett said: “We're delighted to receive this certificate as it highlights the hard work and dedication of our pupils, staff and the local community to create something so special and unique. The remainder of the display has now been placed in our Chapel Courtyard so we will have a lasting memory of this wonderful creation.

“Remembrance Day has always been a special day in our school calendar, last year was even more important as it marked the centenary of the Armistice that brought the First World War to an end. With that in mind, we wanted to put together a really memorable tribute to the brave soldiers who so sadly lost their lives.

“Our clock tower can be seen from miles around so to have 7,000 ceramic poppies streaming from the clock face down the tower and then the bank below provided a wonderful spectacle. Our pupils, their parents, former pupils and many others, including people from the local area, have worked so hard to make the poppies; it has been a wonderful collective endeavour."

The school’s history has close links to the First World War. In 1916, following the Zeppelin bombing raids on London, the school’s founder Arthur Masson Kilby moved his 40 young boys from their school, Lindisfarne, in Blackheath, London to Abberley Hall to keep them safe during the conflict.
Its clock tower, built in 1884 by John Joseph Jones, played a key role in the Second World War after becoming a Home Guard Observation Post which helped to spot potential enemy raids on Birmingham.

Abberley Hall School is an independent, co-educational, day and boarding school for 2-13 year olds. It has around 200 pupils and 30 staff.

The show must go on - Shrewbsury Bookfest defies the lockdown with ...