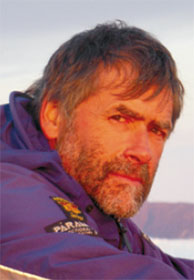 Glenn grew up in Kent, but, inspired by his father’s Welsh heritage, he moved to Mid Wales 20 years ago and lives near Builth Wells with his wife Clare. A professional sculptor, he undertakes commissions, and creates his own original work, as well as teaching stone carving.

Top: Pilgrim
“Part of a temporary exhibition at Strata Florida Abbey, this piece blew down in a storm as it wasn’t meant to last – but it became so popular locally that the Strata Florida Committee want me to rebuild it as a permanent fixture.” 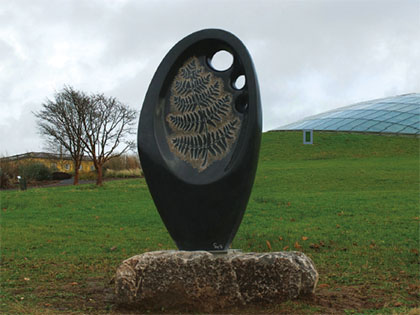 Osmunda
“This piece is at The National Botanic Garden of Wales. Part of a project with Sculpture Cymru – a group of sculptors living in Wales – it was inspired by the work of Dr Natasha De Vere, who’s done extensive research into the DNA barcoding of plants. Carved from Kilkenny marble, the sculpture is based on a fern called ‘osmunda’ which scientists recently discovered exists today exactly as it did millions of years ago. I found this idea intriguing, and wanted this sculpture to be suggestive of a fossil.” 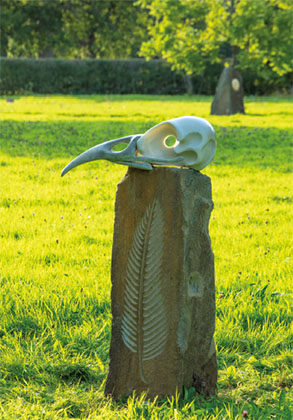 Silent spring
“This is part of a series of three sculptures I made, one of which won the top award in the Royal Cambrian Exhibition in 2019. It’s a tribute to author Rachel Carson who wrote the book Silent Spring in the 60s about the indiscriminate use of pesticides and the impact on the natural environment. The sculpture incorporates a marble carving inspired by a bird skull I found in my garden, with a bronze beak, on a sandstone base with a feather etched into it. I wanted this to be a memorial to life that’s gone, and that we’ll never get back.”

Subjugation
“One of a series of figures I made, like Pilgrim, using timber cladding and steel, this was photographed in one of my favourite places in Wales – the Abergwesyn Valley. The idea came from when I was a kid and my mum would take me to the Natural History Museum. I remember walking in and seeing the dinosaurs, which in the room looked absolutely huge. I wanted my pieces to be photographed in a remote wild landscape, so once you start moving away from them they rapidly look quite small – to reflect humankind’s insignificance. The poses were chosen for different reasons, and I wanted this figure to look tortured and despondent.”

More information: For further details, or to see more of Glenn’s work visit www.glennmorris.co.uk or follow him on Instagram @glennmorrissculpture

Peace of mind at Dormy Care Communities - A message from our friends at Brockingto...

Helping us through the tough times - A message from Beth Stretton, of Carmarthensh...