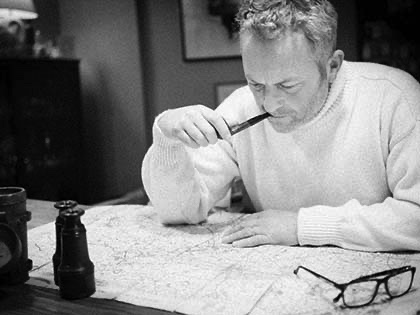 We know and love Welsh Border Life columnist Jules Hudson as the presenter of Escape to the Country, yet he's also an archeologist with a lifelong passion for military history

I have been very fortunate throughout my career in often being able to combine many lifelong passions with the chance to make a TV show alongside them. Country life – well that speaks for itself, but I’m also a long time student of military history – something my role as an army reservist in the Royal Engineers also indulges. Over many years in TV, I’ve enjoyed countless and often privileged opportunities to explore and immerse myself in some of the most famous battlefields in the world, journeying across Europe, North America and even India in search of the early life of the later Duke of Wellington.

But of all the conflicts I’ve studied, the First World War has always resonated at this time of year, thanks to the annual reminder of the spirit of goodwill that broke out on the Western Front during the Christmas truce of 1914. Just four months into a war that would last a staggering four more years, and cost the lives of millions of men on all sides, the now fabled truce commemorates the moment when opposing troops left their trenches to share a brief moment of collusion in No Man’s Land – and at least one game of football. It was one of the most unique events ever recorded in British military history, and perhaps not surprisingly has long since become the stuff of folklore.

As an old archaeologist (yes, passing the milestone of 50 has probably edged me nearer to securing my own place in the archaeological record than I’d like), I’ve always loved a map and a recent foray to purchase a Christmas present for another old chum who also loves a bit of military memorabilia allowed me the chance to indulge in some online collectible retail therapy. Whilst having promised Mrs H that I would not be buying for myself for fear of adding yet more antique clutter to the place, I worked undercover, seeking purely a gift. However, these things are rarely that easy, and when I stumbled upon a genuine 1917 map of one of the most notorious stretches of the Western Front, I caved in and bought it.

A few days later, a small envelope arrived, in which was a battered and well-worn image of one of the most fought over parts of the planet, and one that bears the names of some of the most infamous sites of the First World War. From Poperinghe in the west, through the once prosperous town of Ypres, and covering Passchendaele and the now famous town of Menin, at who’s gate daily reverence is given to the fallen, this ancient sheet of paper was far more revealing than even I realised it might be. 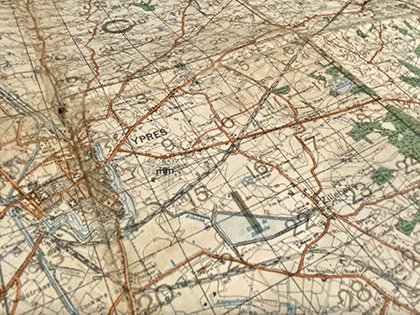 Jules' Christmas present to himself: a genuine 1917 map of one of the most notorious stretches of the Western Front

Published as a third edition in February 1917 by the Ordnance Survey, the landscape it was based upon had by that time all but disappeared into a sea of cratered mud and water. Many of the smaller villages it shows would have vanished, and for a pilot flying overhead, the only recognisable landmarks would have been the major rivers and canals that determinedly carved their way through the carnage, across which were scattered the remains of hundreds of thousands of men who gave up their lives often for just a few yards of shell-torn misery.

Yet what was most revealing is that the map makers retained the pre-war layout. In military terms, whoever used this map would have had to lay across an overlay; a trace of the front and its features as they would have appeared to him. Trenches, light railways, objectives and strategic positions along with their respective units and areas of command would have filled this overlay, which would have been regularly updated. At some points on my map, major roads have been inked in, but what is most surprising is the amount of new information it contains printed onto the old pre-war graphic. For example, to the North of Ypres, I’ve found Hampshire Farm, Algerian Cottage, Lancashire Farm, Forward Cottage and Camden Villa. These are names given to earlier settlements, but which after three years of conflict had in effect changed their identities and which had, in this battered geographical record, preserved in some measure the character and identity of those who fought and died around them.

Unwittingly I have bought a map which begs years of research and which will, I am sure, prompt a return to France for yet another battlefield foray. For no more than the cost of a pair of jeans, I find myself staring at something which in all other respects is priceless. It’s often said that a picture paints a thousand words. This one, once carried by a soldier and perhaps studied under candlelight in the fug of a hollow carved into a trench, paints a picture of thousands of lives that were played out and lost over a few square miles of France and Belgium.

Its original owner was part of a generation that doubtless often thought the crisis in which they found themselves would never end, yet they kept on battling against insurmountable odds with an unshakable sense of hope underpinned with enormous self-sacrifice. Does that sound familiar?