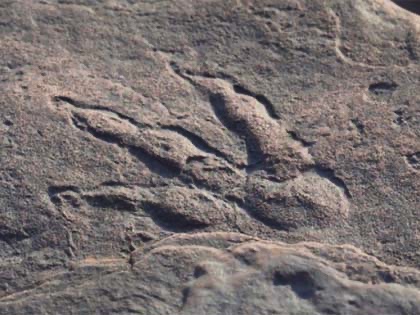 Barry may be famed as the location for Gavin & Stacey, but a toddler has stolen the local limelight for now with her discovery of a 220-million-year-old dinosaur footprint.

Bendrick’s Bay, right next door to the South Wales resort, is also a renowned palaeontology site - "the best in Britain for dinosaur tracks of the Triassic period” in fact, according to The South Wales Group of the Geologists' Association. And four-year-old Lily Wilder has proved the group to be spot on by stumbling upon the 10cm-long print in what’s been hailed as an incredible discovery. Experts say it's the finest impression found in the UK in a decade.

Sadly the exact species of dinosaur can’t be identified, but it’s thought to be from a 75cm slender animal which would have walked on its two hind feet and hunted small animals and insects.

Lily’s proud mum, Sally Wilder explains:” It was Lily and Richard (her father) who discovered the footprint when they were walking. She said 'daddy look'. When Richard came home and showed me the photograph, I thought it looked amazing. Richard thought it was too good to be true. But I was put in touch with experts who took it from there.”

Special permission was received from Natural Resources Wales to legally remove the footprint, with the fossil extracted and taken to the National Museum Cardiff where it will be preserved.

"Its spectacular preservation may help scientists establish more about the actual structure of their feet as the preservation is clear enough to show individual pads and even claw impressions," National Museum Wales said in a statement.

The find is an incredible echo of a short story by Esther Evans from Wrexham which was published here on walesandborders.com only three weeks earlier, in which a seven-year-old finds a two-million-year-old dinosaur fossil during a fictional beach clean.

If you would like to go dinosaur hunting yourself, Bendricks Bay is a great place for a day out. While footprints can be difficult to see, visitors are more likely to see them at low tide when the tracks retain small puddles of water. It’s also easier to spot the footprints when the sun is low in the sky as longer shadows help highlight the prints.

The Bendricks can be accessed via a path which follows the outside of the security fence around HMS Cambria at Hayes Point, Sully or by following the coastal path in an easterly direction from the public slipway at the Vale of Glamorgan recycling centre at Hayes Road, Sully.

Los Angeles, Wales, Shropshire.... - As a Shropshire company continues to hold a c...

Celebrity rescue - Last year's I'm a Celebrity Get Me Out of Her...

On the right track - The village of Bow in Mid Wales has re-joined...