Slam dunk for the Hobnob 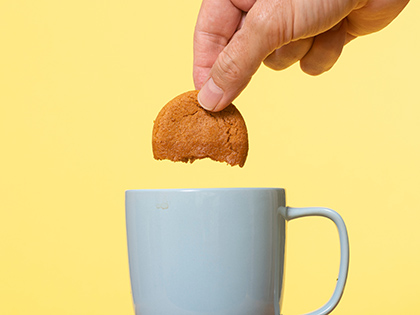 As we traipse back to work, bleary-eyed in the driving rain after the over-indulgence of Christmas, us Britons can be forgiven for taking solace in a nice cup of tea and a biscuit. But, as scientists seem to have been grappling with for years, the question is, which biscuit?

With the NHS in crisis and the ‘twindemic of flu and Covid causing chaos in our hospitals, you might wonder why scientific resources aren’t being diverted to more important issues. But there’s little more irritating than dunking your biscuit in your tea, only to find it keel over in a soggy state and plop back into your cup. Don’t you think?

Hence the DUNC Study* - the Direct Uptake of Nutrition and Caffeine - in which scientists in Cardiff literally took the biscuit - four types of biscuit, in fact - and ran the tests. And now it can be revealed that oat biscuits make the best dunkers.

The study looked at a number of factors, including nutritional content, saturation volume, crunch reduction and dunk break-point. Each biscuit type - Hobnob, Digestive, Shortbread and Rich Tea - was subjected to a two-second dunk, with two repeat tests run for each. The average scores were assessed and lo, the oaty Hobnob lasted longest before breaking after its dunk - a whopping 29 seconds, as opposed to 17.5 seconds for the shortbread, 8.5 seconds for the dodgy digestive and less than two seconds for the lamentable Rich Tea.

There was one caveat, however. The digestive may have come third, but in an act of biscuity defiance, it retained its crunch far more than its rivals before capitulating back into its dunking pool.

So, as we face the long slog of January, now you know. The humble Hobnob will stick around long into your mid-morning dunkathon. But when it comes to the crunch, that stalwart of tea breaks - the digestive - might still take some beating.

* The DUNC Study was published in the Christmas issue of the British Medical Journal… which features an annual light-hearted article!

British Sea Power - Bangor to Belfast will be one of the first ro...

The Queen - Our nation mourns...