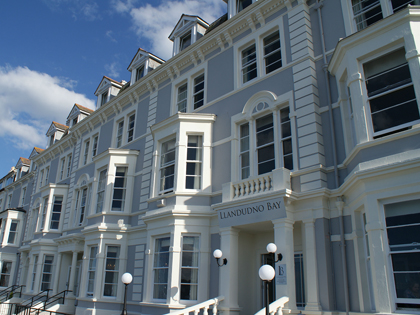 It may look like another classic hotel along the Promenade, but step inside and Llandudno's newest kid on the bay is a brave, new world away from chintz ‘n’ chips

Those Victorians, they excelled in many aspects of life. Engineering and Christmas are two that leap to mind. But they also knew a thing or two about creating the perfect seaside resort. And with its majestic crescent of grand architecture, wide promenade and glorious pier, Llandudno is a perfect example of the latter, where classic, seafront buildings in white, cream and pastel shades are the beating heart of this North Wales town, each boasting unique charm.

The ‘Queen of the Welsh Resorts’ first became a holiday destination in the mid 1800s, thanks to forward-thinking architect Owen Williams. With the help of local landowner Lord Mostyn, Williams began to develop the marshlands behind Llandudno Bay and thereafter the town continued to grow in both stature and popularity, as more and more imposing hotels and private homes began to appear along the sea front. The award-winning pier, built in 1878, sealed the town’s reputation as the premier resort in the Principality. The longest in Wales at 800 feet, it was and remains a magnificent sight.

Yet while Punch and Judy shows, candy floss, amusement arcades and stripy deck chairs are still the images associated with Llandudno, there’s far more to the town than seaside clichés. These days it’s as much a business hub, an arts centre and, somewhat controversially, a rich seam of renewable energy, as it is a fish ‘n’ chips stopover. Reflected in this is the changing approach many of the local hoteliers are adopting.

The new owners and management of one such establishment – Llandudno Bay Hotel – are embracing modern times in the town, offering a fresh take on coastal breaks while respecting the resort’s period charm. It was with this in mind that they embarked on an ambitious refurb which culminated in the hotel’s reopening in 2015.

“Our desire was to bring something new to Llandudno and to step away from the more traditional style,” says sales and marketing manager Kevin Baxter as he looks out over the Promenade from the hotel’s lounge bar. “We’re part of a change, attracting the next generation of audience, who are looking for the new experiences that the region has to offer. We aim to be as far removed from the traditional perception of Llandudno as possible, but without compromising on service.”

The new owners, Giant Hospitality, who also own the nearby Caer Rhun Hall, don’t do things by halves; a staggering £4.5m was lavished on the refurbishment of the hotel’s 61 bedrooms, its bars and restaurant. 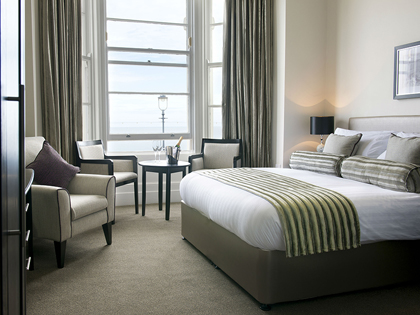 Above: All of the hotel's 61 bedrooms have been completely refurbished

“With the interior, the aim has always been chic elegance, yet with a slight quirkiness thrown in,” says Kevin. And the result is nothing short of impressive. The light grey facade, the corniced plasterwork, sash windows and perfect symmetry all resemble many of the hotels on the promenade, but what’s that by the entrance? A giant stripy deckchair in which even a Welsh prop forward would appear Ronnie Corbett-esque. It’s a hint at the Bay’s fun, quirky side, while inside a modernist, minimalist world opens up. Muted colours on the walls, crushed velvet drapes, retro furniture and minimal ornaments engender an atmosphere of uncluttered calm. The only nod towards traditional opulence are several glittering chandeliers in the elegant restaurant.

The minimalist theme continues in the deluxe bedroom we tried, which gives fabulous Promenade views from the bay window – the perfect place to sit with a coffee and watch the world go by. The ensuite offers a modern bath with shower and the softest bathrobes you’re likely to come across. And Elemis, the upmarket spa brand, are the toiletries of choice, in the shape of shampoo, separate conditioner and body lotion. There’s complimentary WiFi in all rooms, and a ‘smart’ TV is thrown in for good measure, resulting in hours of fun for techies wishing to wave a remote control around by way of interacting with the online world. It’s also where you’ll find all the hotel info, so no well-thumbed, dog-eared brochures to rifle through to find out what time breakfast is.

The 61 rooms are a mix of Standard and Deluxe. Standard rooms have both front- and rear-facing perspectives and include fluffy bathrobes, slippers, USB charging points and complimentary WiFi.

Deluxe rooms all boast fantastic views of the bay. Some have bay windows and all have both a bath and shower, fluffy bathrobes, slippers, USB charging points and complimentary WiFi.

Welsh Coastal Life stayed in a deluxe room with sea view, at a cost of £145 per night including breakfast.

It’s not just the interiors that eschew tradition, however. The food is as far removed from bog-standard British fare as you can get, thanks to a talented young head chef who isn’t afraid to push the boundaries.

Ben Jones spent much of his childhood globetrotting as his father’s job took the family to such far-flung destinations as Chile, Kenya and Peru, where Ben’s interest in food first began. After joining Llandudno Bay Hotel in April 2015, he was soon asked to take over as head chef and promptly set about making his mark. 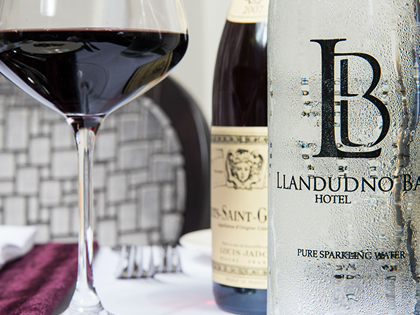 Dining delight: The Llandudno Bay Hotel is shaping up to be a culinary game changer

“I sat down and re-designed the menu and really made it my own,” he says. And what a good move that turned out to be.

The confit of mackerel on the à la carte has become something of a signature dish, so we were eager to give it a try. And from the moment our plates were placed in front of us, it was clear Ben’s no ordinary chef. Presentation is intricate, immaculate and well thought out and the fish tasted unlike any mackerel we’ve eaten before, the zesty flavour complimented perfectly by a crispy skin and refreshing lime gel. “We cure the mackerel in salt, sugar, lime, vodka and orange juice first, then slowly cook it in oil, bring it up to the right temperature and blowtorch it to crisp up the skin,” Ben reveals. “It’s a new and different way of cooking a simple mackerel.”

A main of spiced monkfish tail with tomato and thyme risotto was equally delicious and beautifully cooked. Monkfish can easily end up tough when over-cooked, or insipid and watery if underdone, but here the balance was spot on. And it’s worth noting the food was bursting with flavours, yet not over-seasoned. So many chefs rely too heavily on salt, as raging thirsts can later reveal. An unusual coconut and lemongrass panna cotta typified the desserts, the subtle flavours and perfectly soft texture bearing testament to Ben’s faith in his own adventure.

“I was 15 when we moved to Peru and I saw how the people there take the simplest ingredients and turn them into something amazing. So much care and attention goes into every dish.

“I’m trying to do something similar with our à la carte menu – taking the basics of ingredients and using them in the best way possible to create something classic yet modern.”

And he’s certainly achieved that. The food is a perfect fit with the modern, quirky style of the Bay. In fact it was the stand-out experience. Yes, there’s the views, the friendly staff, the comfy bed and luxurious bathrooms. But while there are many good places to dine in Llandudno, this talented chef is taking resort cuisine to a whole new level.