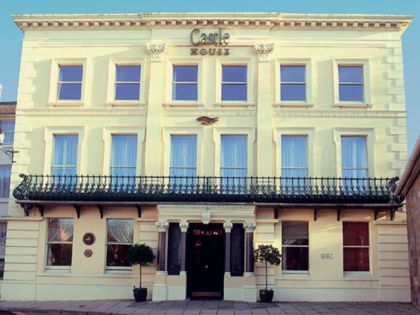 Celebrating their 10th anniversary at the helm of Hereford’s Castle House, the Watkins family attributes the hotel’s success to its ‘farm-to-fork’ philosophy

Perched on the banks of the River Wye in Hereford, Castle House Hotel exudes a stylish serenity that comes with its boutique feel and attractive regency villa appearance. So it’s little surprise the Grade II-listed hotel captured the imagination of Herefordshire farmer and businessman David Watkins, some 10 years ago.

It was November 2006 when David spotted an advert in a local newspaper and, since the place had long been a favourite of his, he bought it. Until that point, David’s most treasured property had been the family’s beloved 120-year-old Ballingham Hall Farm, and with Ballingham’s reputation for producing arable produce and pedigree livestock, it seemed intuitive that the two enterprises would merge. The results are gratifying.

“We’re farmers by nature and it made sense when we bought the hotel,” explains David’s son George, who is the hotel’s business development manager and has worked at both the hotel and on the family farm since leaving school.

“Using our own home-grown produce was certainly a natural progression. We’re farmers first and that means we know how to grow food, something we’ve been doing for generations. 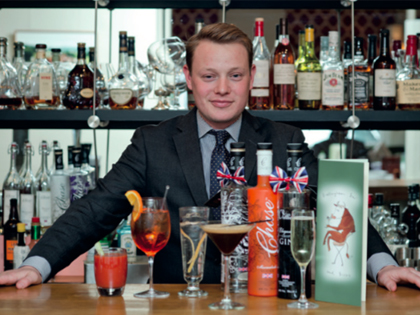 “The hotel and farm liaise very well and discuss what will be grown and what’s needed from the kitchen garden for each season. It’s a huge advantage and the ultimate luxury for the hotel to have its own farm, particularly when it comes to creating menus that celebrate the best of local produce.” he continues.

“People ask ‘how do you keep your chefs happy?’ I just arrive with a basket full of fresh, seasonal vegetables, fruits and herbs, and watch their faces light up!”

Culinary excellence isn’t restricted to the hotel’s Castle Restaurant, however. The more informal Ballingham Bar and Bistro offers great food and some of the best cocktails in Hereford. And both eateries put a team ethos at the heart of their efforts.

George works closely alongside general manager Michelle Marriott-Lodge and executive head chef Claire Nicholls to ensure both restaurants maintain the highest standards. A mention also for Colin Brown who looks after both the hotel’s kitchen garden where they grow seasonal fruit and vegetables, in addition to flowers for the bedrooms and dining tables.

The team’s hard work over the last decade certainly hasn’t gone unnoticed. Head chef Claire has earned two AA Rosettes for the restaurant, and The Daily Telegraph named Castle House as one of the UK’s top 10 hotels. 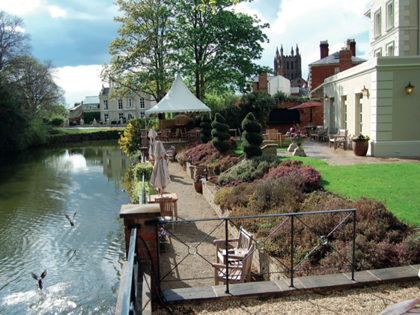 Above: Despite its city centre location, Castle House enjoys an enviable riverside setting

“It’s very uplifting and rewarding,” smiles George. “We all work hard for excellence and the kitchen team has been with us from the start. They’re always moving forward and thinking of new ideas for menus, while not forgetting traditional British cuisine, which is also very popular.

“Knowing we can grow or raise food with the highest degree of care is very reassuring for us. We get fantastic feedback from guests who really appreciate the symbiosis of ‘farm to fork.’”

Ten years on from seeing that advert, David is still involved in the running of the hotel, and with a loyal and hard-working team behind him, both Castle House Hotel and the farm at Ballingham Hall look set to go from strength to strength for generations to come.