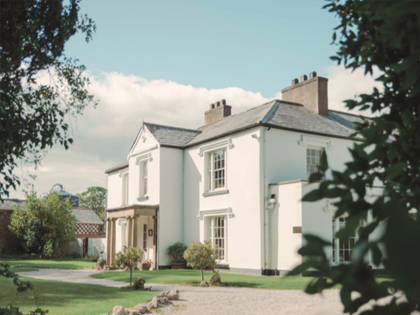 Broadening your horizons is the key to success, says Bre Carrington-Sykes, who runs the Denbighshire hotel with husband Graham

I’m from a small town called Roscrea in County Tipperary, Ireland, but came over to the UK in 1976. In the late ’80s I bought a house with a derelict barn that I converted into a little bed and breakfast. A few years later I met my husband, Graham, who’s a hotelier by trade. Before we took on Pentre Mawr we bought a hotel in Conwy. Graham taught me how to be a hotelier but I softened him up a bit and got him to drop some of the formality. Now I couldn’t do it without him and he couldn’t do it without me.

How did you come to run Pentre Mawr?

The house dates from the early 1600s and has been in Graham’s family that whole time. He always imagined the place as a hotel, so when we inherited the house we turned five of the rooms into bed and breakfast rooms. Then the recession hit and we had to look for ideas to make Pentre Mawr stand out, which is how we ended up building six African safari lodges. They’re big and romantic and each one has its own bathroom and hot tub.

Where did the idea for these lodges come from?

We’ve been visiting South Africa for years and absolutely love the country. One year, we wanted to get out in the bush to get closer to the animals but I’m not a camper so we ended up staying on a game reserve in these big, luxurious tents. The weather was terrible and we were just sat there in our tent, drinking bubbly and watching the animals, when Graham said it was just like being in Wales. It was a eureka moment for me.

We found someone in Cape Town to make the tents for us, then we had to get planning permission and make sure everything was up to EU safety standards. It was still the early days of glamping so we got an awful lot of publicity, which got the ball rolling.

Is there anything else that’s helped make Pentre Mawr a success?

Back in 2013, some friends asked us if they could use Pentre Mawr for their wedding and it just sort of took off from there. Last year we hosted 15 weddings and both this year and next we’ve 30 on the books.

What do you love about hosting weddings?

We look after everyone, manage the day, hand out the fizz and just make sure people are having a good time. The biggest challenge is getting people to realise that it’s also about having a nice break. We say that it’s your country house for the weekend. I love it when people come down to breakfast in their dressing gowns and really embrace what we’re trying to give them, which is just a really lovely home away from home where they don’t have to do the washing up.

How do you unwind?

Every October and February we travel to South Africa for a few weeks. We own a house by the sea in a little town called Hermanus, which is famous for the whales that come into the harbour. I call it my happy place. The weather’s perfect for us, there’s only a couple of hours’ time difference plus they drive on the same side of the road as we do here. I love the bush, being out with the animals – I love absolutely everything about it.

We’ve got a gang of friends down there and life is very similar in many ways because we live in the countryside in Wales.

Of course, life is diffcult for a lot of people there. We support a crèche in Alicedale; they’re lovely kids and I take them sweeties, toys, educational things and they get excited when I visit.

What are your hopes for the future?

Our son, Conor, is at university in Cardiff but he’s aware that one day Pentre Mawr will be his responsibility – but hopefully not for at least another 10 years. I want him to travel because it opens the mind. I hope he goes off somewhere exciting and then we can go and visit him. If we hadn’t gone out to see the world then we wouldn’t be here now because I don’t how we would have made the business work.