The Ffestiniog and Welsh Highland Railways 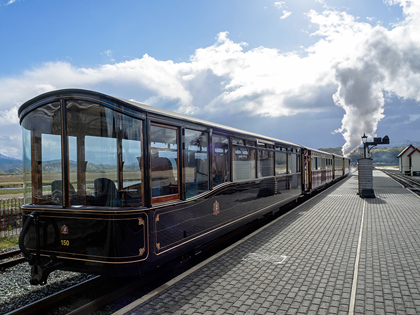 One of the world’s top attractions, right here on our doorstep

Outstanding scenery, comfortable carriages and historic steam engines, all in the heart of Snowdonia. What more could steam enthusiasts wish for? In fact, what more could anyone wishing to sit back and watch the world go by wish for?

Climb aboard one of the glorious trains of the Ffestiniog and Welsh Highland Railways, and you step back in time, to that misty, sepia age when everything just seemed to be right. And that’s before you’ve left the station. En route, fabulous coastlines, ancient oak woodlands, mountains, rivers and castles all audition at your window.

Not that the leap back in time is at the expense of comfort. With some of the most luxurious carriages on any preserved railway - standard or narrow gauge - it’s a more civilised age you’re entering, with an at-seat buffet service, snacks, refreshments and a fully licenced bar featuring locally-brewed, award-winning beers.

Investment is ongoing - 2014 saw the opening of the new £1.25 million Porthmadog Harbour Station, offering greatly-improved passenger facilities and a convenient cross-platform interchange between the two railways. And spring 2016 saw the unveiling of a brand new train (pictured above) valued at well over half-a-million pounds, the jewell in the crown being a beautifully finished art deco Pullman observation car. Architect-designed and hand-built by local craftsmen, it’s a triumph of a bygone age right here in the 21st century.

“We’re bringing the carriages into the modern age with all the mod cons and comforts people expect, but in a nostalgic, historical way,” explains the railway’s Andrew Thomas. “People’s jaws drop when they see the observation car. It has a real Orient Express look and feel.”

The company is the oldest railway company in the world still operating trains, and the Ffestiniog Railway is the world's oldest narrow gauge railway, with almost 200 years of history, taking you on a 13and-a-half-mile journey from the harbour in Porthmadog to the slate-quarrying town of Blaenau Ffestiniog. What’s more, they still operate three of their original locomotives, which are over 150 years old.

The trains climb over 700 feet from sea level into the mountains through tranquil pastures and magnificent forests, past lakes and waterfalls, round tight bends, clinging to the sides of mountains or tunnelling through them.

The Welsh Highland Railway, meanwhile, is the UK's longest heritage railway and runs for 25 miles from Caernarfon, past the foot of Snowdon and the picture postcard village of Beddgelert, then through the stunning Aberglaslyn Pass and on to Porthmadog.

To experience an 80-mile round trip, look out for dates when The Snowdonian embarks on a journey along the whole railway with a variety of motive power. Tickets include a tour of Boston Lodge  - the world’s oldest railway workshop - and breakfast and tea on the train, while hotel packages are also available. The journeys are being staged to help raise funds for the railways’ Diamond Jubilee Appeal to “finish the job” and maintain standards that have seen what is the longest heritage railway in Britain become one of the world’s top attractions.

When all this is over... - As we wait for restrictions to be lifted, sta...

Goodrich Castle, Herefordshire - Soak up the atmosphere of this imposing and h...

Offshore on Anglesey - Take a trip to a wildlife-rich island or emba...

Carding Mill Valley, Shropshire - A picturesque valley in the heart of the Shro...

Llanfyllin, Powys - A bustling little town in the hills with plen...