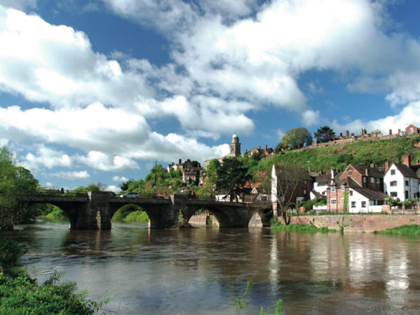 A town divided – but in a good way – Shropshire’s Bridgnorth enjoys a variety of attractions. Just don’t be in two minds about what to visit

Bridgnorth sits atop a sandstone cliff and is split into the High Town and the Low Town, which are named in accordance with their elevation around the River Severn, dividing the two. It began to develop as a town in 1101 when Robert de Belleme, the third Earl of Shrewsbury built a church and a castle here, and in 1102 the town became a royal borough. It went on to become one of Europe’s busiest river ports, but nowadays it serves as a picturesque retreat for outdoorsy types who come for the walking, wildlife and fishing.

In Bridgnorth you get not one, but two towns to explore. Both enjoy views – down, from High Town, which held the castle, churches and a number of grand homes, and up, from Low Town, which was a busy port. The two are connected by a set of steps and a steep old cartway, which was once the only route for wheeled traffic until a road was built in 1786. The cartway is lined by quaint little houses, and once held alehouses and lodgings for watermen working on the river boats.

The oldest and steepest inland electric funicular railway in England works up and down the 111ft sandstone cliffs, using two cars that run on parallel tracks. When the railway opened in 1892 the cars were driven by a water balance system, but they’ve been powered by an electric winding engine since the 1940s. An entertaining mode of transport with spectacular views. 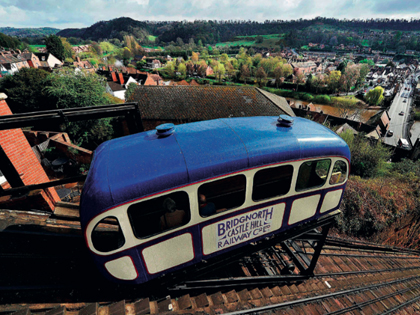 Above: Bridgnorth is famous for the oldest funicular railway in England (pic: © Eddie Brown)

Lovers of the great outdoors are in for a treat. Owls, hedgehogs and birds of prey are regular sightings here, and with such bucolic countryside around the town, seeking them out is a pleasure. There are a variety of circular walks to be enjoyed around the surrounds, and since they begin and end in the town itself, access is particularly easy. Angling is also popular here, with many taking to the picturesque banks of the Severn in the hope of hooking a whopper.

Built in 1101 by Robert de Belleme, Bridgnorth Castle’s distinctive square tower was added during Henry II’s reign. When Cromwell took the town, he had the castle destroyed and stone was taken to repair other buildings in the area. Today only ruins remain and what’s left of the castle stands at a 15 degree angle – four times the lean of the leaning tower of Pisa!

5. THEATRE ON THE STEPS

Worry not if the weather turns for the worse. Theatre On The Steps boasts its own company of actors and singers, as well as welcoming touring performances.

This distinctive black and white listed building was built in 1650. Originally a barn it now takes pride of place in the High Street and features an oak-framed hall above stone pillars so as to accommodate a regular market beneath it – a tradition that continues to this day. Tel: 01746 762231.

A bridge has joined the two banks of the Severn here since medieval times, and this one – with six arches – was rebuilt by none other than Thomas Telford in 1810. It is usual for it to be adorned by a joyous array of flowers.

Whatever the time of year, Christmas shopping is an absolute pleasure here! Christmas Presence (www.christmas-presence.co.uk) is a year-round Christmas shop and arts and crafts workshop - a dream come true for young and old alike, with plenty of seasonal nostalgia to enjoy. And Bridgnorth was in fact the first fairtrade town in Shropshire, so you’ll find fairtrade products available in most of the shops here.

For a local touch, don’t miss the markets. Traders take to the High Street and Meredith’s Yard to sell an array of goods, from food through to gardening tools, every Saturday. Beneath the town hall there are trade stands filled with cakes, crafts, flowers and preserves each Friday, Saturday and Sunday.

For antiques go to Old Mill Antiques Centre (tel: 01746 768778; www.oldmillantiques.co.uk) for everything ranging from furniture to jewellery. Or for a range of lovely gifts, don’t miss Roobarb (tel: 01746 761061; www.loveroobarb.co.uk) which has marvellously quirky pieces to choose from.

There are more great gifts to be found at Mothers Goodies (tel: 07807 876000; www.mothersgoodies.co.uk), a family run store o ffering scented candles, wax melts, crafts and natural products, all of which are homemade in the town.

The Kings Head (tel: 01746 762141; www.thekingsheadbridgnorth.co.uk) is a family run, Grade II-listed, 16th century coaching inn with original oak beams and three roaring fireplaces for the winter months. The food is modern English and is made from produce sourced locally.

You’ll find traditional home-cooked food at The Old Castle Inn (tel: 01746 711420; www.oldcastlebridgnorth.co.uk) where the dishes are best accompanied by a range of real ale. Or for a riverside position, take a seat at The Boatyard Bridgnorth (tel: 01746 218030) which combines a picturesque outlook with tasty meals.

Tuck into tasty tapas at Casa Ruiz (tel: 01746 218084; www.casaruiz.co.uk) where the delicacies are freshly cooked and authentic. Alternatively, seafood enthusiasts should visit Fish (tel: 01746 768292; www.fishbridgnorth.co.uk) where not surprisingly they specialise in fresh seafood and the finest fish from around the world.

When it comes to getting your head down, there’s an option to suit everybody here in Bridgnorth. The Falcon (tel: 01746 763134; falconhotelbridgnorth.co.uk) is a characterful affair - a lovely, listed, 17th-century coaching inn with 14 recently renovated rooms that offer a variety of layouts.

There’s family run bed and breakfast accommodation at The Croft Bridgnorth (tel: 01746 762416; www.crofthotelbridgnorth.co.uk) which has a four-star rating and a handy location. Another good bed and breakfast is Wood Cottage (tel: 01746 714759; www.woodcottageholidays.co.uk). This 16th-century cottage is a little out of town in the south Shropshire hills surrounded by meadows and woodlands.

Alternatively, The Town House (tel: 07974 911794; www.bridgnorthaccommodation.co.uk) is ideal for those after a luxurious apartment to call their own.