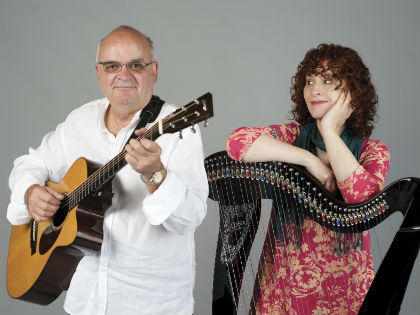 This December harp and guitar will join in seasonal music matrimony for a trio of concerts hosted in local Shropshire venues.

Celtic Christmas Strings is the work of guitar extraordinaire Chris Newman and Irish harpist Maire Ni Chathasaigh, who received her country's most prestigious music honour in 2001. Individually famed for originality, innovation and virtuosity on their respective instruments, together, with 42 strings between them, they have created one of the most distinctive voices in modern acoustic music and tour worldwide.

Their new Christmas show features a breathtaking blend of traditional Irish music, swing jazz and bluegrass, plus festive favourites including Away in a Manger, The Holly and the Ivy and I Saw Three Ships, played in their traditional formats but given a fresh voice with arrangements that are intricate, inventive, moving and beautiful.

Máire and Chris’s alchemy on harp and guitar creates a very special magic at all times, performing songs in their characteristically heart-warming style and offering helpful stories behind the pieces – a spellbinding treat for mid-winter.

Book your tickets for this Christmas treat at: