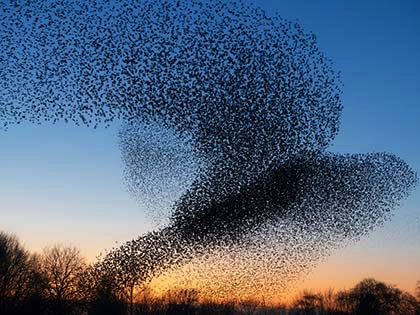 Autumn is a great time to visit an RSPB reserve as colder temperatures, damp weather, and shorter days mean that wildlife is doing all sorts of weird and wonderful things.

Here’s a collection of top autumn wildlife dramas you may be lucky enough to see. Some you’ll be able to see in your local area, or even out your window, but if you fancy a day out click on the lick at the end to find your nearest RSPB reserve in Wales and the Borders.

The dance of the starlings

Starlings, a medium-sized bird with a remarkable ability to mimic other birds, huddle together when it’s cold at night to stay warm. These big flocks are like dinner buffets to predators such as falcons and hawks, however, so starling need a defence strategy – and they turn to dance.

As dusk falls starlings come together in their hundreds or even thousands to swoop, ascend, dive, and lift in a cloud of orchestrated patterns that can help throw off predators. Their improvised choreography once led scientists to theorise that starlings must have physic powers!

For your best chance at seeing a murmuration, pick a day that’s clear, calm, and cold, and try to arrive a bit before dusk. Starling murmurations can start as early as September and often continue into January or February.

Fungi are in a kingdom of their own, more closely related to animals than plants. They communicate with each other, transfer nutrients from plant to plant, and break down matter so it can turn into new life. They’re the machines that keeps our planet running.

In autumn we have a chance to see some of these fungi in the flesh. The mixture of warmth and damp from the rain, along with the colder nights, triggers the fruiting bodies of many fungi to erupt from the ground in the form of mushrooms.

There are over 15,000 species of fungi in the UK so if you go searching you never know what you will find! Look out for the dead man’s fingers, or the ‘bleeding’ beefsteak fungus.

The clash of the red deer

Red deer are the largest land mammal in the UK. A fully grown male, or stag, can weigh as much as 225kg, and from the end of September to November the stags come together to strive for the right to mate with the females, called the rut. Males strut in parallel walks, bellow across the fields, and even clash antlers in their fierce battle to father the next generation. It’s best to watch from a distance, however – stags’ hormones can make stags aggressive even towards humans at this time of year.

Autumn leaves are a daily wonder. The shorter days means the leaves absorb less light, and therefore create less sugar, triggering the plant to seal off the leaf and begin to shed. The lower temperatures also break down the compounds in the leaf, leaving us with a kaleidoscope of greens, yellow, reds, and oranges.

And it’s not just the leaves that provide spectacular colour shows in autumn. Shorter days bring fantastic sunsets and reedbeds’ transform from green to purple and gold.

Autumn is a time of movement for many birds across the UK. The colder weather prompts some species, such as the swallow and the house martin, to journey thousands of miles back to their warmer homes in Africa. To other birds that spend most of the year in Iceland and northern Europe, however, the UK’s autumn is relatively balmy, and we begin to welcome whole new flocks of migratory geese, ducks, and wading birds.

Head to the coasts to see some of the great travellers in their autumn and winter homes. At some places, such as RSPB’s Snettisham, the birds become so numerous that when the tide comes in they take to the air in flocks of hundreds or even thousands!

There are 170 RSPB reserves across the UK, so to find your closest, or a reserve near a place you’d like to visit, click here www.rspb.org.uk/reserves-and-events

A drop of joy - The white petals and green leaves of the sens...

Trip the light fantastic - Margam Country Park and the Garden of Wa...

Moreish Monmouthshire - Abergavenny is a haven for foodies and culmin...

Full steam ahead - Step back into simpler times at this year's S...

A taste of Wales - For an authentic taste of rural Welsh living,...