Get a glimpse into the life of wildlife presenter and filmmaker, Gordon Buchanan on his UK tour

Visiting both Cardiff and Monmouth, wildlife presenter and filmmaker, Gordon Buchanan MBE will be chatting to audiences about his incredible 30 years working both behind and in front of the camera. A regular on Springwatch, his most notable nature documentaries include Predators and me, The Elephant Family and me, The Polar Bear Family and Me and Life in the Snow.

This will be a showcase of both his most celebrated work, and a behind the scenes insight into how successful nature programmes are made. Always reflective, Gordon Buchanan is taking this opportunity to understand how his time within the wildlife industry has changed and what the future potentially holds for us and the animal kingdom as co inhabitants of our rapidly changing ecological landscape.

We caught up with Gordon recently and asked him what inspired him:

Q: Tell us a bit about your childhood and how did it prepare you for a career in wildlife film making?

A: I grew up on the Isle of Mull, which is a very wild part of Scotland, and I think that drove my passion for being outside and close to nature.  School didn’t do it for me: academically I wasn’t really present - all I wanted was to be outside and the classroom was torture.  I was a daydreamer and I always knew I was never going to work in an office. I’d see the scallop divers, and I’d think: that’s a really good way to spend your working life.

I grew up in the late seventies and eighties, and David Attenborough’s documentaries were big on the telly and I devoured them.  Attenborough is tremendous: his career has lasted so long, he’s such an important voice and he has so much respect, right across the globe.  I thought my admiration for him could go no higher - but then I met him, and it soared even more.

Q: How did you get into making nature films as your career?

A: I was right in at the deep end with making wildlife films.  I was 17, and working in a restaurant on Mull at weekends and evenings to earn a bit of money and the husband of the owner was a cameraman.  He was going to Sierra Leone for 18 months to make a film about the animals in the Gola rainforest and he asked me if I wanted to come along as his assistant. I knew nothing about what it involved and I had no idea really what I was getting into, but I knew it was the sort of life I wanted and I never wavered from that belief.  So having never been abroad, there I was a month after leaving school, setting off for a year and a half on the other side of the world.

But if getting there was serendipity, and while it was definitely the best break I ever had, those 18 months were tough going. I was so young and being so far from home was hard.  But I knew it was an incredible opportunity and I knew I’d be able to build on it and move into the life I’d love.

Q: How has wildlife filmmaking changed over the years you’ve been doing it?

A: Right now I’m on my way to Brazil for a conservation series where we’ll be filming jaguars. Big cats are the pinnacle for me and watching them hunt is utterly fascinating.  The technology has changed hugely over the three decades since I started out and it’s always been about showing viewers the parts of nature we’ve never been able to see before. Technology allows us to do that more and more.

But the other huge change across the years has been the increased realisation about how vulnerable and fragile these areas of the world where I’m filming actually are. Thirty years ago we didn’t realise the impact human beings were having on wildlife. Now we understand that so much better and I’m acutely aware of it in every way, from my own carbon footprint to questions around changes that need to be made by governments across the globe. Right now we’re losing animals before we even knew their species existed - that’s a tragedy.

Q: Given all that, how optimistic are you about the future?

A: Despite the immense difficulties I do have hope for the future. I spent time at COP26, in my home city of Glasgow, and I was really moved by how children and young people are  making their voices heard. At the moment it’s the suits who are making the decisions, but soon it will be the turn of the new generation and they’re going to understand the climate emergency in a very different way, which I think will make for real change. My growing-up years were the eighties, when we were all in awe of the US and consumption as it was all about big cars and having stuff. But the mentality has changed and tomorrow’s decision-makers are being formed by that.

Q: Do you ever find yourself in danger?  What sort of scary situations have you been in?

A: I’ve been chased by bears, tigers and elephants, but not all at the same time. And let me tell you; that’s when you discover how fast you really can run.

Gordon will be at St David’s Hall, Cardiff on the 6th February and The Blake Theatre, Monmouth on the 19th February. For tickets which start at £27.50, visit: www.ents24.com

Sing the season - Warm up your vocal chords as Britain’s ...

Books, beautiful books - If you love literature, step back in time and...

Books, glorious books - Immerse yourself in literature at a Shrewsbur...

The Cambrian challenge - Pull on your walking boots, have fun and get ... 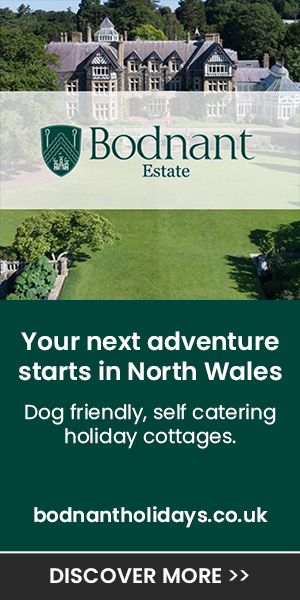